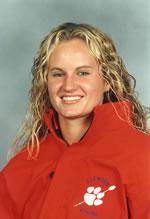 Q & A With Barbi Breimann

What was the best part of your N8+ race at Regionals? I would have to say the best part was when we beat Virginia in the semi-finals race. It was the team that had motivated us to give 110% every practice since ACC’s. Everyone in my boat was reminded of the 2.7 seconds that they beat us by and to finally have our hard work and determination pay off was a great feeling.

What contributed to the success of the team this year? I believe our success came from giving 110% every day of practice and the heart of the team. I feel I could count on any member of the team to do anything that was asked and that was shown in the races at Regionals.

Why did you choose Clemson? I choose Clemson because my family has always been big fans of Clemson. My parents made me stay in state because of the Life Scholarship and I had always deep down inside wanted to go there. I wanted to go to a big football school and one that was known for academics and Clemson seemed to be just the place. And when I learned I could be a Division I athlete with rowing then that sealed the deal.

Why did you choose to row at Clemson? I saw it as a great opportunity to continue my athletic career and try a new sport.

Why do you push yourself so hard everyday and put in so many hours? I know it is what it takes to be the best you can be. I know that everyone else on the team is working just as hard to make the team as fast as we can. I want to know when I am starting on the starting line that I am completely prepared to do what I have to do to help the boat go as fast as it can go. And the only way of obtaining that feeling is putting in the long, grueling hours and pushing myself everyday.

How much of your success comes from mental toughness and how much comes from physical preparedness? I feel about 75 % of my success has come from mental toughness. Everyone has the thoughts during an erg test or a race like I could just quit now, but then you think, where would that actually get me and the answer to that question is nowhere. You remember your teammates are going through the exact same pain and that you are all in it together. I believe only 25% is physical preparedness because if you believe you can do something then your body will allow you to do almost anything.

What were your feelings after the races at Regionals? After the first race, I didn’t feel too good about it. But, we all put that race behind and went out that afternoon and had a great race. We beat Virginia for the first time and it was just an overwhelming feeling. It is what we worked day in and day out for and to finally get that reward was just remarkable, words cannot really describe the feeling. We went into Sunday’s grand final race with confidence and we believed we could do well. We had come behind from the day before and we knew we had what it took to place in the top. We were in 6th for the first 500 meters as the before and then we just started moving. I was so honored to be in the boat with those eight other girls because each and every one of us would have done anything for each other and after that race I knew it for a fact. We all pulled as hard as we could for each other and the reward was an amazing feeling. The last two races showed an amazing amount of heart from each person and it was the ultimate sign of a team.

Tell me what you love about this sport: Rowing is nothing like I have ever done before. I played volleyball and basketball in high school, but rowing is so much different. I love that it is the ultimate team sport. In other sports, you can have individuals who stand out as a great player, but in rowing each person pretty much gets the same respect. There are no individuals who do one thing that is better than anyone else; you are all in it together. Just being on the team with an incredible group of girls and knowing that we are all in it together is just astounding.

What has been the greatest experience so far for you as a Clemson rower? I would have to say my greatest experience as a Clemson rower thus far would be getting 3rd in the grand finals at Regionals. It was a culmination of what we had worked for since August and to see how well all the hard work paid off for us in the end was an amazing feeling. I am looking forward to what next season has in store for us.