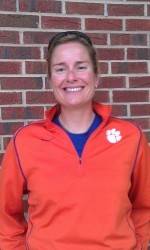 Onufrieff comes to Clemson after spending the last seven years as the Head Women’s Rowing Coach at Columbia University. During her last two years with the Lions, Columbia achieved its first ever team national ranking, finishing as high as 19th in 2010.

Onufrieff spent the summers of 2001, 2006, 2007 and 2008 as an assistant coach with the United States National Rowing Team. She was in charge of the silver medal winning 4- in 2008 at the Senior World Rowing Championships in Linz, Austria and the Gold Medal winning Under 23 Women’s 4X in Strathclyde, Scotland in 2007.

“We are really glad that Melanie has joined our staff here at Clemson,” said Tenenbaum. “She has an incredible amount of experience in Division I women’s rowing, and with International elite women’s rowing. Melanie is going to have an immediate impact on our program. She will play an integral role in coaching the varsity student-athletes here at Clemson.”

“From the academic offerings, to the athletic resources, the setting and the people, Clemson is a truly impressive place,” said Onufrieff. “I am excited to be a part of this team, and looking forward to fun and fast rowing.”