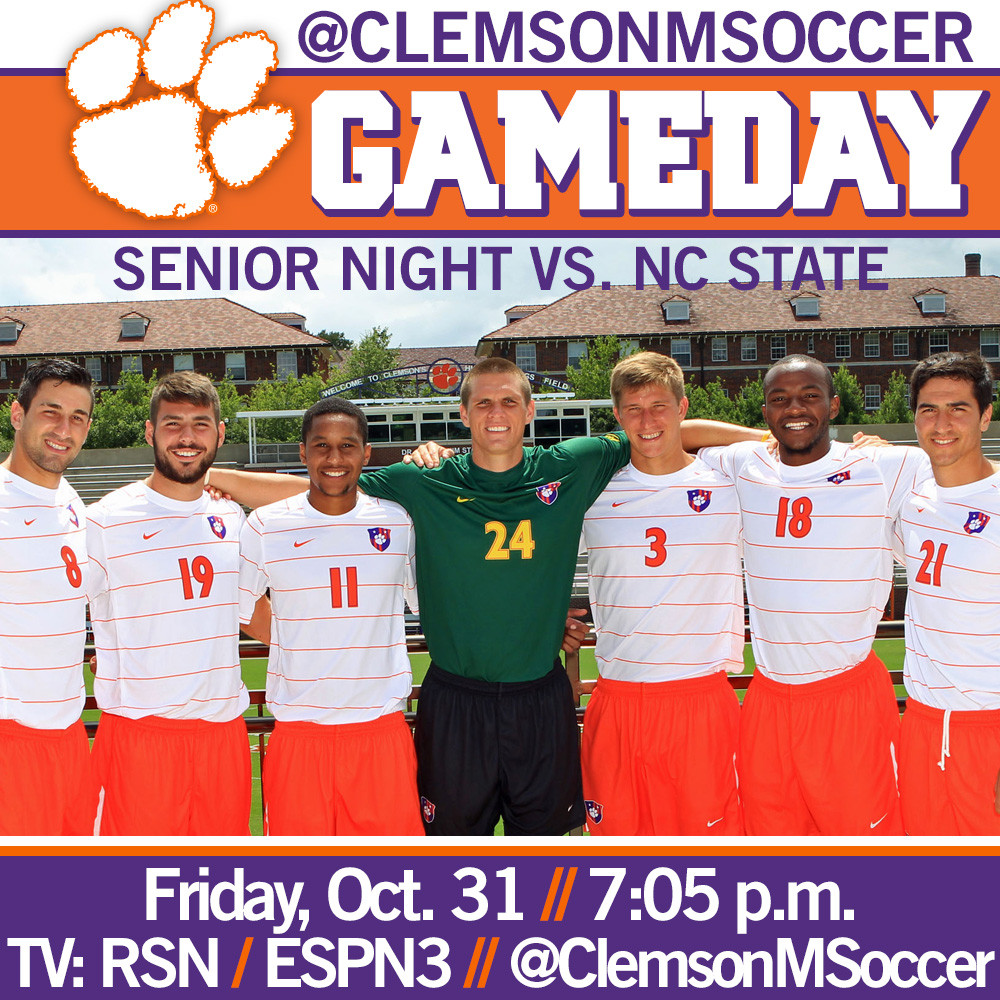 CLEMSON, S.C. – The 19th ranked Clemson men’s soccer team hosts conference foe NC State Friday night at Historic Riggs Field in the last regular season match for both teams. The team’s six seniors will be recognized prior to kickoff at 7 p.m. The match will be broadcast on RSN.

Admission is free to Friday night’s match and Clemson encourages fans to visit trick-or-treating and bag decorating stations at both Riggs Field and at Jervey Gym, where Clemson volleyball hosts Virginia at 7 p.m. A prize will be awarded at halftime for the fan with the best costume.

Clemson improved to 9-6-1 overall this season with a 3-0 win over No. 25 South Florida Tuesday night at Riggs. Seniors Manolo Sanchez, Phanuel Kavita and Bobby Belair each scored a goal. Sophomore goalkeeper Andrew Tarbell picked up the win and his fourth shutout of the season. The Tigers remain in a three-way tie for first place in the ACC’s Atlantic Division with Syracuse and Louisville.

To date, 14 different players have scored for Clemson. Sanchez, junior T.J. Casner, sophomores Thales Moreno and Austen Burnikel and freshman Oliver Shannon all are tied for the team in goals scored, each has three. Sanchez leads the team in assists with five this season. Tarbell has made 11 starts in goal and has 28 saves this season. Redshirt junior Chris Glodack has made six starts, recording one shutout with 27 total saves.

NC State brings a 7-5-4 overall record and 1-3-3 record in the ACC into Friday’s match. The Wolfpack is led by senior Nick Surkamp and sophomore Michael Bajza, each have 11 total points this season. Junior goalkeeper Alex McCauley has made 15 starts in goal this season, tallying 67 saves and six shutouts. NC State is coming off a 4-1 win over Liberty Tuesday night in Raleigh.

Clemson and NC State have met 55 times in the history of the two programs, with Clemson leading the overall series 34-14-7. The Tiger have won the last five matches in the series, including a 1-0 victory in Raleigh last season on Sept. 14.