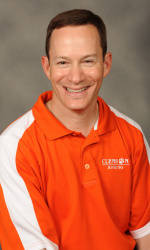 CHARLOTTESVILLE, VA – The Clemson rowing team recorded strong performances in three different sessions this weekend at the UVA Invitational. The Tigers competed against #1 Virginia, #19 Minnesota, Notre Dame and San Diego in session one on Saturday morning. Then, Clemson faced Virginia, #14 Cornell and San Diego in the Saturday afternoon session. Sunday morning, the Tigers fought against #15 Michigan State and Northeastern.

Clemson’s 1st Varsity 8 saw second place finishes in two of their three races over the weekend. Each of the Tigers races were hard-fought, finishing only two seconds behind Notre Dame Saturday morning, six seconds behind #14 Cornell Saturday afternoon and placing third behind #15 Michigan State and Northeastern on Sunday.

The Tigers’ 2nd Varsity 8 saw second place finishes in each of their three races over the weekend, while the Varsity 4 finished second in two out of three races. On Sunday, the Tigers’ V4 defeated #15 Michigan State and Northeastern to claim Clemson’s first first-place finish of the weekend.

The Tigers return to action next Saturday, April 21st, at 9:00 AM for the ACC Championships, held in Clemson for the third-consecutive year.