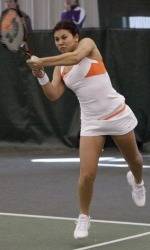 No. 12 Tigers Post Comeback Upset Victory Over No. 7 UCLA

CHARLOTTESVILLE, VA – The No. 12 Tigers knew they’d be in for an uphill battle when they drew No. 7 UCLA in the Final 16 of the ITA National Indoors on Friday. Facing a 3-1 deficit, the hill must have looked more like a cliff. The Tigers were up to the challenge, posting a 4-3 come-from-behind win over the Bruins, advancing to the Final Eight for the first time in school history.

“From Keri, the surgeon, to Klara and Masha encouraging each other, to Josipa, it was so great to watch,” said head coach Nancy Harris. “It was a great celebration when we finished, and they were really happy. What was interesting is that we had three players in one part of the facility, and three in the other, so they couldn’t even see each other. Everybody was just battling.”

Clemson’s two freshmen, Masha Belaya, posted upset victories over ranked opponents to even the score, and put the match in the hands of top player Josipa Bek, who took advantage of the opportunity, winning her 11th straight match, and second straight three-setter.

“We put together a solid gameplan for Masha, and she prevailed,” said Harris. “She kept pressure on the weaknesses, and it was such a great match. Klara was hustling all over the court, and was playing a big server. In the second set, she was struggling with Dolehide’s serve, and keeping it in play. That got her into the game, and once she gets in a point, she can really run everything down.”

UCLA took the first doubles decision, as Noelle Hickey and McCall Jones defeated sophomores Caroline Magnusson and Nelly Ciolkowski. Clemson’s second-ranked tandem of Bek and Wong defeated Dolehide and Seguso, 8-2 at flight one to win their 19th match of the season together. UCLA took the doubles point at flight three, with Remynse and Montez defeating the freshman pair of Belaya and Vyskocilova, 8-5.

In singles play, UCLA features five players ranked among the nation’s top-100, while Clemson has just two. Keri Wong, ranked 37th nationally, was the first to finish, defeating No. 90 Noelle Hickey, 6-3, 6-0 at flight two, evening the score at 1-1.

The Bruins took what appeared to be a stranglehold on the match, as Maya Johanssen beat Magnusson at flight six, 6-3, 6-2, and No. 58 Remynse defeated Ciolkowski, 6-2, 6-2.

With a 3-1 lead, UCLA needed just one more win to clinch. Belaya was the first to hold her ground, defeating No. 73 Pamela Montez. Belaya won the first set, 6-0, before dropping the second, 6-4. She then found herself down, 3-2, and needing a break to tie. Belaya got the break, and went on to win the third set, 6-3, to bring Clemson to within one at 3-2.

Vyskocilova was also in a battle at flight four, as her first tiebreak set took nearly two hours to complete over No. 78 Courtney Dolehide. Vyskocilova went on to win the second set, 6-3, drawing Clemson even, and shifting the focus to flight one, where Bek, ranked 14th in the nation, had her hands full with 96th-ranked McCall Jones.

“Once Klara got her win and Masha got hers, we moved over to where Josipa was playing,” explained Harris. “It was funny because she saw us coming around the corner and asked what the score was. We told her `3-all’, and she let out a roar, and we said `that’s why she’s our captain.’ It was phenomenal. Josipa just played some unbelievable tennis to close it down. “

Jones won the first set, 6-4, before Bek took the second, 6-3. The two split the first two games, and Bek held to go up 2-1. She then broke to go ahead 3-1, and held again to take a 4-1 lead, inching the Tigers closer. Jones took two of the next three to draw to within two games at 5-3, but Bek again broke Jones to clinch the comeback for the Tigers, 6-3. It was Bek’s 23rd career win in three sets, which is the fourth-most in Clemson history. Bek has now won all 11 of her matches in 2011.

“I really rely on Jo and Keri’s leadership, and it’s really carried over, and they are both really leading the team,” said Harris. “Keri got the first point, and Jo the last point, and they were like bookends for us.”

The win was Nancy Harris’ 14th in her career over a top-ten team. Clemson advances to face No. 2 Florida, who defeated No. 9 Miami, 4-1 on Friday. Clemson and Florida will play at 9:00 am in the round of eight.