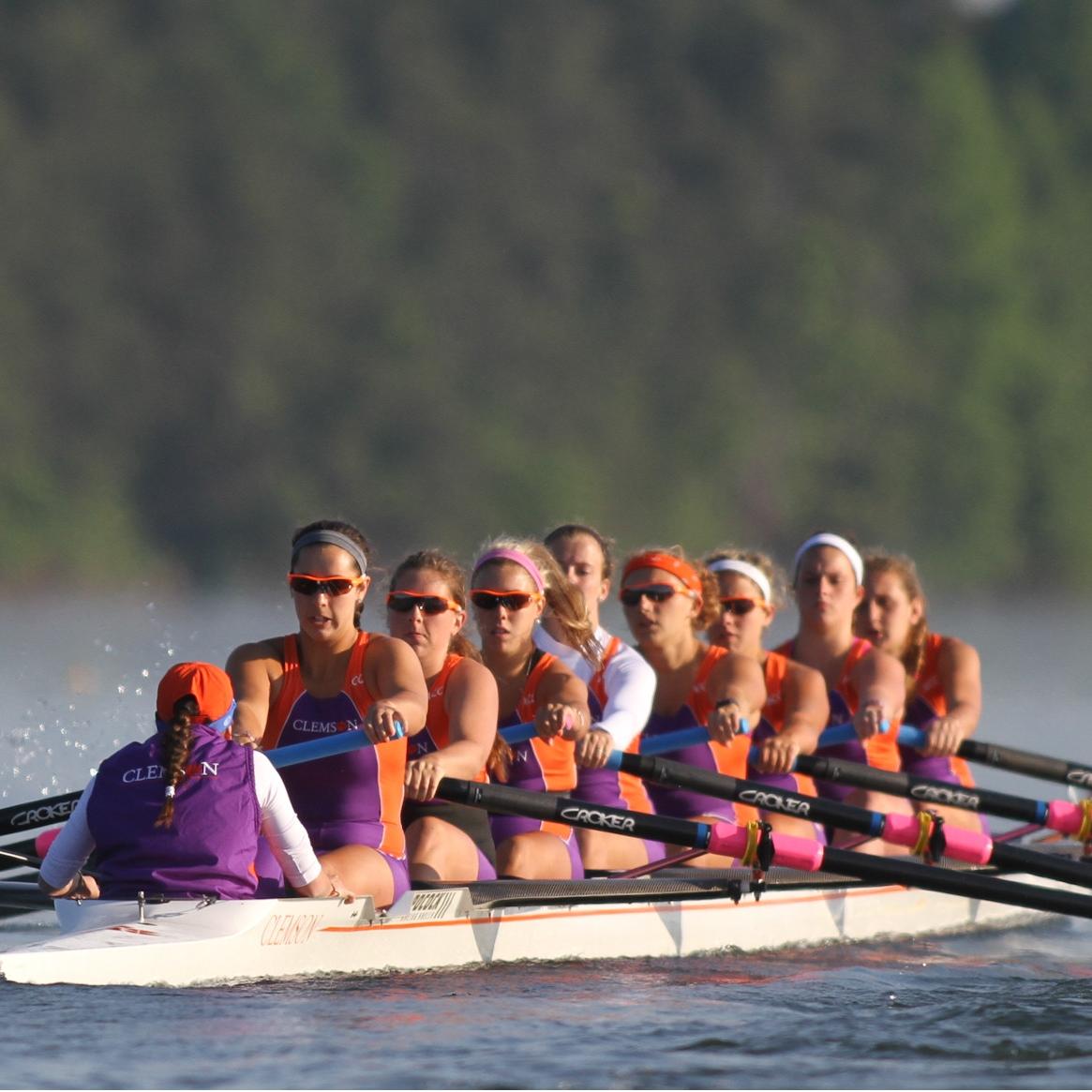 With the 2014 Fall Rowing season about to begin, let’s meet our incoming freshman class. Get to know a little bit about who they are, what they did before they enrolled at Clemson, what Head Coach Stephen Frazier Wong thinks about each and finally why they decided on Clemson:

Coach says: “She comes from Marin Rowing Association, a really good program in California. She’s brings experience from a competitive program, a top level junior program, so we’re excited to see what she can bring to Clemson.”

Why she chose Clemson: “I knew I wanted to be a part of the Clemson Family from the moment I stepped on campus. #GoTigers #AllIn #SolidOrange #ClemsonRowing”

Coach says: “Emily is quickly establishing herself as one of our top freshmen. She comes from Sarasota, a top junior program, and she has augmented ehr skills through her experience competing in the US junior development program. She is the type of person who helps make everyone around her better while still performing at a high level individually.”

Why she chose Clemson: “I wanted to row for a top Division I school that valued its athletes and challenged them academically, and Clemson is just that. There is a great sense of pride in being a student-athlete at Clemson and a sense of family in our school that you cannot find anywhere else in the country.”

Coach says: “She’s an upbeat person, has a great attitude. She’s from Raleigh, N.C. and rowed previously with Claire Prevost.”

Why she chose Clemson: “I chose Clemson because I fell in love with the campus, the rowing facilities and the general attitude of Clemson students. There is an impressive amount of school pride which I felt drawn to and the majority of students here were so friendly that I couldn’t imagine going anywhere else.”

Coach says: “She is a smart, strong rower. She wants to go to medical school. She is very focused on her academics as well as rowing at a high level.”

Why she chose Clemson: “The people here are so friendly and happy. Plus Clemson has a great program for my major as well as a study abroad program. Not to mention how fantastic the rowing facilities are!”

Coach says: “She has been a great asset with the walk-ons and getting to work with the walk-ons who have very little experience with rowing. She is someone who can really take the time to give them some technical knowledge and to teach them on the water. She’s really helpful with the novice coxswains as well just taking the time to work with them. Very enthusiastic and quickly becoming a leader.”

Why she chose Clemson: “I chose Clemson for many reasons. First, I wanted to come south to the warmer weather. I also wanted to go to a big school in a college town. Clemson is the perfect school for me; it has good academics, a great college atmosphere and great opportunities with the rowing team.”

Coach says: “Maddie is a hard worker and we are looking for her to bring her leadership experience to the freshman novice squad. This young team needs someone like her who knows what it means to lead by exampe.”

Why she chose Clemson: “I wanted to go to Clemson since I began looking at colleges. They had everything I wanted from the beautiful campus to the great academic and athletic programs. I could not see myself at any other school.”

Coach says: “She is an incredibly smart student-athlete. She rowed for Rocket City before here. She is driven, in the Calhoun Honors College and brings a great attitude to the team.”

Why she chose Clemson: “Clemson was the first program to reach out to me. I had never heard of the school before then but I came for a visit and immediately fell in love with it. The campus is beautiful, all of the people are friendly, the engineering program was much stronger than what my state schools had to offer plus I could row on a competitive team. Between the academic and athletic opportunities alone I was happy, but this is just such a beautiful school.”

Personal: Four year rower, two years in the first Varsity 8+…2nd at New England Interscholastic Rowing Association (NEIRA) Regatta in 2013…13th at 2013 US Rowing Youth Nationals…fall 2012 and spring 2013 state champions…20th at Head of Charles in 2012…competed on the volleyball team for two seasons…ran track and field for one season…swam for one season…born 7/22/1996…majoring in marketing…father rowed at Tulane University

Coach says: “She’s an extremely hard worker. She’s one of the first people at practice and one of the last to leave. She’s looking to be a big contributor on the team.”

Why she chose Clemson: “I chose to attend Clemson University because of the prestige of Clemson’s academics and athletics. I fell in love with Clemson as soon as I walked on campus and I am incredibly proud to be a Tiger.”

Coach says: “She brings a lot of personality to the coxswain seat. She is very energetic and gregarious, but on the water she is very focused. She will be really strong for us on the varsity side.”

Why she chose Clemson: “I chose Clemson because they were one of the few universities that offered the major I wanted to study. Coming from a small boarding school up north I felt as though I had already experienced the small liberal arts college feel so I wanted something bigger but still had that sense of family and amazing school spirit and pride. I also love orange and purple!”

Personal: Rowed for five and a half years for Asheville Youth Rowing Association…swam for high school team for four years…captain of rowing and swim teams senior year…lettered all four years in swimming…born 3/8/1996…majoring in engineering…father played lacrosse and mother played soccer at Rensselaer Polytechnic Institute

Coach says: “She has a lot of potential and we’re excited to see what she can do in a more competitive environment. She rises to the occasion and exceeds her own expectations.”

Why she chose Clemson: “I love the campus, the people/community and the rowing team. Also my favorite color is orange!”

Coach says: “Rad has an iron will. She is really competitive and wants to win. She wants the team to be fast and she is a good team player. She is competing for a spot on one of the varsity boats. She doesn’t say a lot, but when she talks, everybody listens.”

Coach says: “She’s really passionate. She has it in her to be really great. Her dedication to find a way to row is admirable. Before Clemson she had a lot of logistical obstacles to overcome just to be able to row, so we’re excited to see what she can do as she can just focus all of her energy on rowing.”

Why she chose Clemson: “I chose Clemson University because on my official everyone here acted as one big family. The school spirit here is intense whether it’s Solid Orange Friday, game day, or just a regular Monday. The students here love representing their colors.”

Coach says: “She is always one of the first to practice and one of the last to leave. She knows where she wants to go and what it takes to get there. She is extremely dedicated. She’s a bit of a quiet person, but she leads by example. Just a hard worker.”

Why she chose Clemson: “The combination of strong academics and athletics were both factors in my decision to choose Clemson, but above all, experiencing the Clemson Family was the primary reason why I chose this school.”

Coach says: “She brings a wealth of sculling experience that will help her go far in her rowing career. Her heightened boat sensitivity and technical skills workng with two oars will serve her well as she transitions to the sweep stroke.”

Why she chose Clemson: “I chose Clemson because I fell in love with the school. The school spirit, the pride, and the campus feel were exactly what I was looking for in a school. The amazing athletic facilities as well as the school itself totally sold me on coming to Clemson. The moment I set foot on campus, I knew I wanted to go to school here.”

Personal: Team captain for Marina Aquatic Center Junior Rowing (2013-14)…Went to the Youth National Championships in the Varsity 8+ in 2013 and 2014 with Marina Aquatic…won the Coaches Award…voted most inspirational teammate for 2012-13 and 2013-14…born 4/24/96…majoring in political science

Coach says: “She likes to challenge herself. She is motivated by high standards and uses her teammates to push herself and vice-versa. She has been a good role model for the novices and really takes the time to explain things.”

Why she chose Clemson: “I loved the team and program. The facilities are phenomenal and the lake is beautiful. The support student-athletes receive at Clemson is tremendous in both our athletic and academic worlds. I’m blessed to be a part of this team.”

Personal: Finished third at the Head of the Hooch in WV4+…finished first at the Midwest Rowing Championships in the WV4+ and third in the WV8+…rowed to a seventh place finish ay the Youth Nationals in the WV4+…named captain of the soccer team during her freshman season…older brother Ryan played soccer at Dayton…born 1/24/96…majoring in biological sciences

Coach says: “She is as tough as nails. She shows maturity and poise that is rare in a freshman. She is a strong competitor that pushes herself and her teammates everyday.”

Why she chose Clemson: “I chose Clemson because of the overwhelming feeling of family on campus and to have the opportunity to represent The Paw every time I get in the boat.”