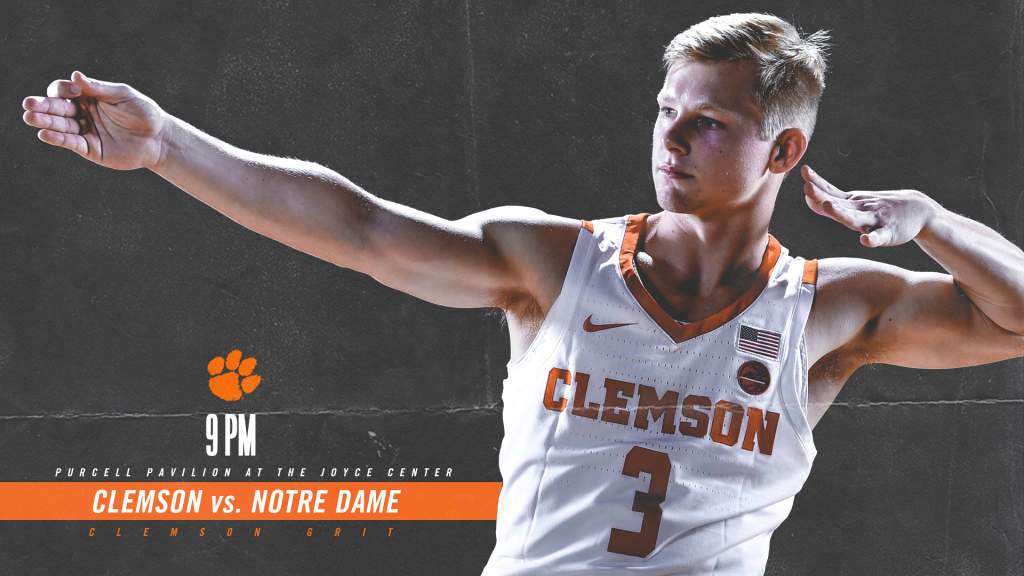 • The Clemson Tigers will look to get back on track on March 6 when it travels to Notre Dame. Tipoff from Purcell Pavilion at the Joyce Center is scheduled for 9:05 p.m. ET.

• The contest will be televised on ESPNU with Mike Couzens and Jordan Cornette calling the action courtside, while Don Munson and Tim Bourret will be on the radio waves. The radio call will be available on the Clemson Tigers Network and Tunein.com.

• Clemson will look for its second-straight victory in its overall series against Notre Dame. The series only dates back to the 2013-14 season when the Fighting Irish joined the ACC.

• Clemson ranks third in the ACC in scoring defense (64.3 points allowed per game) and second in conference games (63.1).

• According to KenPom, Clemson’s adjusted defensive efficiency now ranks 10th in the country (91.6).

• Brad Brownell will look for his 167th career victory at Clemson. He is currently just 11 shy of tying Cliff Ellis for the most in program history (177).

• Marcquise Reed is one just two guys in the country to average at least 19.0 points, 5.0 rebounds, 3.0 assists and 2.0 steals per game this season.

• Reed jumped into 15th on the all-time scoring list. Reed now has 1,380 points in his Clemson career. His performance against UNC pushed him over 1,900 career points (1,909). He could be come the 19th active player to amass 2,000 career points in NCAA Division I.

• Elijah Thomas surpassed 600 career rebounds in his time at Clemson and became just the seventh player in program history to amass 900 points, 600 rebounds and 150 blocks.

• With 614 career rebounds – Thomas is 22nd all-time in Tiger history.

• Shelton Mitchell is the ninth player in Clemson history to amass at least 1,000 points and 300 assists in a career. He joins current Director of Player Development Terrell McIntyre on the list of nine. He’s one of two to post that line and shoot at least 80.0 percent from the free throw line.