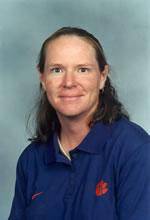 ANN ARBOR, Mich. – Clemson rowing assistant coach Kelly Lynch has been named the 2004 South Region Assistant Coach of the Year by the Collegiate Rowing Coaches Association (CRCA). The honor is the second straight for Lynch, who shared the award in 2003. Lynch, who just finished her sixth season coaching the Tigers’ novice rowers, led the Novice 8+ to an impressive season, including winning the South Region title in May.