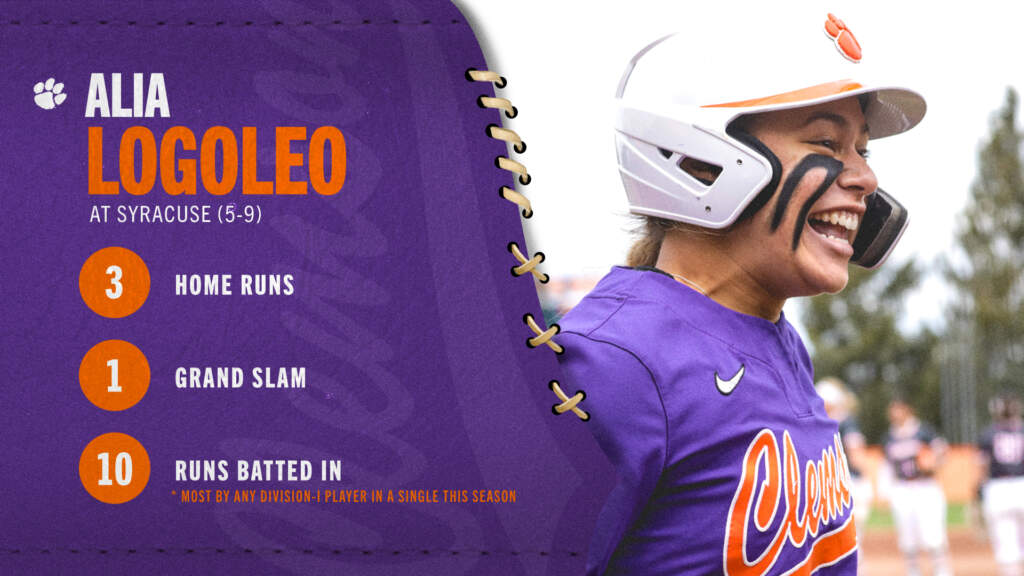 CLEMSON, S.C. – For the first time in her career, Clemson Softball infielder/outfielder Alia Logoleo (Nashville, Tenn.) has been named the ACC’s Player of the Week for games played May 3-9. With Tuesday’s announcement, Clemson finished the 2021 regular-season with a league-best five ACC weekly distinctions.

Logoleo was instrumental in helping the Tigers clinch the 2021 ACC Softball regular-season championship after exploding at the plate in Clemson’s title-clinching game at Syracuse on Sunday. The second-year freshman raked in 10 RBI in Sunday’s contest against the Orange, which the Tigers won 19-2 in five innings. Logoleo recorded three home runs, including a grand slam, three-run and two-run shots, and a double to go a perfect 4-for-4 at the plate. Her 10 RBI are the most in a single game by a Division-I player this season, and the most by any hitter against a Power-5 opponent since May 7, 2015 when former Ohio State catcher Erika Leonard accomplished that same feat against Indiana. For the week, Logoleo hit .500, slugged 1.500 and totaled 11 RBI.