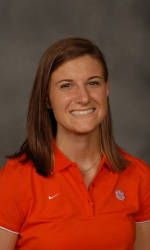 Clemson, SC – Tiger rower Liz Robb was voted the Atlantic Coast Conference Rowing Freshman of the Year by a vote of the league’s six head coaches on Saturday. She is the first Clemson rower to earn this honor. Robb rowed all season with the Varsity 8+ crew, which is an impressive feat for a freshman. She was one of just two freshman named to the All-ACC rowing team. Robb was joined on the All-ACC team by seniors Suzanne Van Fleet and Jessica Leidecker. This marked the second consecutive year that Van Fleet has earned All-ACC honors.

In other notable rowing action, Clemson’s Novice 8+ crew won the ACC crown in a record time of 6:46.3 on Saturday. The Tiger’s victory marked only the third time Virginia has been defeated in an individual event in the history of the league championship. Clemson’s Varsity 4+ took first place in 2001, and Clemson’s Novice 8+ crew also won in 2005. As a team, Clemson finished second overall at the 2008 ACC Championship.

The Tigers next action will come on May 17-18 when they compete in the South/Central Regional Championships held in Oak Ridge, Tennessee.