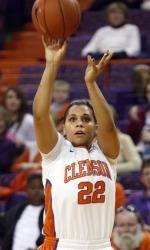 “I thought we came out and competed tonight, but it seemed like every time we went on a run, they were there to hit a big shot to end ours,” said Head Coach Itoro Coleman, who just completed her first regular season. “The Tournament is a new start for us, and we look forward to learning our matchup and finishing strong.”

Coleman reached the finals in all four of her seasons as a player, and won ACC titles in 1996 and 1999.

The Tigers hit ten of their 21 3-point attempts, but managed just ten points in the paint. Clemson held the Seminoles to 36.7 percent shooting for the game, but foul trouble in the post and several turnovers plagued the Tigers throughout the night.

Sthefany Thomas, Kirstyn Wright, and Bryelle Smith each hit three 3-pointers. Clemson was within seven at 50-43 with 11:38 to play in the game, but the ‘Noles outscored the Tigers 17-7 down the stretch to pull away.

Alexa Deluzio led all players with 22 points, 16 of those coming in the first half. Florida State turned 23 Clemson turnovers into 27 points, while Clemson could only muster 10 off Florida State’s 20 turnovers. Wright and Thomas each had 11 points to pace Clemson.

Clemson went into the break facing a 34-26 deficit, as the difference in the half was Florida State outscoring Clemson 11-3 from the free throw line. The Seminoles also turned 13 Clemson turnovers into 21 points while Clemson was only able to get five points off 11 Seminole miscues in the half.

Wright and Thomas each had two first half threes, as Clemson hit five overall, including Smith’s 24-footer.

Clemson opened with an 8-2 run before Florida State stormed back to take a 9-8 lead. They opened up a five point lead before Smith’s three cut it back to two at 24-22. Clemson’s defense held the ‘Noles without a field goal for a 5:27 stretch, but struggled to take advantage.

Florida State stretched it to 33-22, before Thomas hit a three before the break and neither team had a field goal inside the final 2:19 of the half.

Florida State opened the second half with a 12-5 run, taking advantage of Clemson’s three main post players committing their third fouls within the first two minutes of the half.