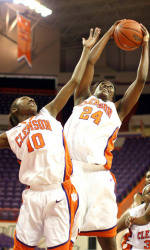 CLEMSON, SC – The Lady Tigers went on an 18-3 run to end the first half and forced 30 turnovers in the game as they defeated Presbyterian, 66-35, on Sunday afternoon at Littlejohn Coliseum. Sophomore Jasmine Tate scored six points during the stretch to finish in double figures for the first time in her career, while Lele Hardy led Clemson (1-1) in scoring for the second straight game with 13.

“This was a good win for us,” said Clemson Head Coach Cristy McKinney. “We improved on a lot of things from the last game. The girls played better defense, had fewer fouls and grabbed a lot of rebounds.”

“Defense was great this game,” McKinney added. “Presbyterian turned the ball over a lot and we were able to capitalize.”

For the game, Clemson scored 33 points off turnovers compared to just five for the Blue Hose on nine Lady Tiger miscues.

Tied at 11 at the 10-minute mark of the first half, Tate scored six straight points to fuel the Clemson run. Kirstyn Wright added a trio of field goals during the stretch and the Lady Tigers allowed the Blue Hose just a single field goal to close out the first period.

Clemson then stretched the lead to 23 (39-16) on a lay-up by Wright five minutes into the second half. Kristen Stevens drained a three-pointer for Presbyterian to cut the lead to 17 with ten minutes remaining, but the Lady Tigers quickly regained the 20-point margin. Lea Smith hit a jumper with 4:34 left for the Blue Hose’s final field goal of the day. Presbyterian hit a pair of free throws for its only points the rest of the way.

Meanwhile, Clemson’s lead grew to 26 on a basket by Bryelle Smith and Thomas converted a three-point play in the final seconds for the 31-point advantage. She finished with 10 points, along with her five steals and four rebounds for the day.

The Lady Tigers will return to action on Wednesday night as they take on in-state rival South Carolina in Columbia. The game is scheduled for a 7:00 pm tip.