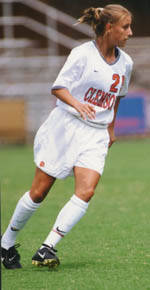 Clemson opens the season 2-0 after sweeping through both its games in their season-opening tournament. Old Dominion drops to1-1 on the season 1-1 in the tournament.

Clemson opened the scoring first on Senior Nancy Augustyniak’s penalty kick at the 9:31 mark. Lady Tiger Freshman Lindsay Browne was pulled down just inside the box to set up the penalty. The Lady Monarches would respond ten minutes later though when Melanie McGovern sent a rocket past Clemson keeper Katie Carson to even the score at 1-1. Maureen McGovern recorded the assist. Both teams would head into the lockerroom though tied at one.

While the first half was evenly matched the second would turn out to be all Clemson as the Lady Tigers would send 12 more shots on goal than Old Domion would in the second half to take over the game and the lead. At the 58:46 mark Junior Tatum Clowney sent a beautiful full volley into the net from 12 yards out, a goal that would prove to be the game-winner. Clemson would add an insurance score with just under 22 minutes to play in the game, when Browne scored her second goal in two games on a full volley off a feed from Sophomore Cindy Mullinix.

The Lady Tigers will be in action again this Friday at Historic Riggs Field when they will play host to the Clemson/Nike Invitational. The tournament will include Auburn, Clemson, Dayton and UNC-Charlotte. Game times are set for 4:30 p.m. and 7:00 p.m. on Friday and 12:00 p.m. and 5:00 p.m. on Sunday.