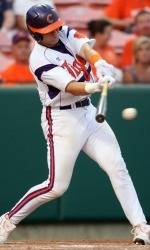 CLEMSON, SC – The ending did not quite go the way Spencer Kieboom imagined Sunday night, but it was of no fault of his own.

After missing on a fastball the moment before from Connecticut’s Kevin Vance with two outs in the top of the ninth inning, the Clemson catcher made the righty pay with the next pitch as he smacked a single to left field to score Will Lamb and Jeff Schaus to tie the game.

However, the good feeling did not last long as UConn’s Ryan Fuller one upped him with a two-out game-winner in the bottom half of the inning as the Huskies forced a winner-take-all championship game at the Clemson Regional with a 7-6 victory at Doug Kingsmore Stadium.

“It was a good ballgame, but a tough one to lose,” Clemson head coach Jack Leggett said. “It went back and forth and back and forth. We had the lead that we needed, but we just could not protect it.

“I have to give them credit. They battled back. We had a good inning at the end thanks to that big hit from Spencer and had a chance to maybe tack on a few more, but we just did not quite get that done.”

Trailing 6-4 thanks to a three-run eighth by the Huskies (44-18-1), Lamb led off the ninth by out running a throw to first following a chopper up the middle. Following an out, Schaus then singled to right and Chris Epps drew a walk to load the bases.

Jon McGibbon then struck out for the second out, setting up Kieboom’s game-tying hit.

“He threw a fastball in so I was just waiting to get a pitch I could do something with,” the sophomore said. “I felt like I have had a good approach all weekend. I had hit some balls hard so I didn’t want to do too much to it.

“He threw me the same exact pitch before that, which he threw for a strike so I just let my hands react, and good things happened.”

UConn did some good things for itself a few moments later, and now Clemson (43-19) finds itself in a position it has not seen too often–facing elimination in a post-season game at home. Clemson is 29-4 in postseason games since 1999, and has not lost a Regional or Super Regional at home in that time period.

Fortunately for the Tigers, they have some recent experiences to draw from.

“We have to be ready to play,” Leggett said. “We have been in this position two years in a row so we have been used to this. It’s something we will be ready for.”

Brad Miller feels this season’s early struggles and last year’s experience should help them when the two teams square off Monday at 7 p.m. for the Regional Championship.

“We have been through a lot,” the Clemson shortstop said. “We have a bunch of veterans that have had our backs to the walls in a bunch of elimination games. That is all you can ask for – a chance to play so you can advance.”

Clemson isn’t sure who it will throw in Monday’s game, but Connecticut will give the ball to senior Greg Nappo. The lefty has a 9-2 record with a 2.61 ERA. He has started 15 games this year, while striking out 48 batters and issuing 37 walks.