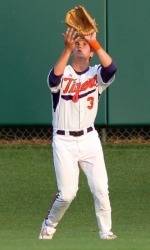 CLEMSON, SC – There are a lot of reasons why home field advantage is so big, especially in baseball.

Of course there are the home fans and of course the home team gets to sleep in its own bed and operate on a regular schedule. But, perhaps the biggest advantages are knowing the little things about a playing surface that visiting teams no nothing about.

At Doug Kingsmore Stadium, one of those things is the hill that rises just before the wall in the outfield. Clemson leftfielder Jeff Schaus used his knowledge of the left field obstacle when Coastal Carolina’s Rich Witten lined a shot off it during the seventh inning of the Tigers’ 12-7 victory Saturday night in the winner’s bracket game of the Clemson Regional.

With no one on and Clemson in front 8-5 at the time, Witten took a David Haselden pitch to left field. Recognizing that the ball was not going over the top, Schaus referred back to a practice drill in the fall that prepared him for what was the biggest play of a game that had so many.

“We do those mundane wall drills in the fall and in the spring, and they will pay off every once in a while,” the senior said.

It paid off big for Schaus and the Tigers (43-18) on Saturday as he let the baseball bounce off the wall, where he grabbed it with one hand, turned around and gunned down Witten, who was trying to stretch out a double on the play.

“That was a big play, man,” Clemson head coach Jack Leggett said. “He got to the ball, let it get back to him and he threw a one-hopper… everything worked out perfect.”

Indeed it did. Instead of being one out with Witten on second base with Coastal’s best hitter–Tommy La Stella–coming to the plate, the Chanticleers were left holding nothing with a chance to do little damage to the Clemson lead. La Stella finished the night three-for-five with three RBIs.

On the flip side, the play was the momentum changer the Tigers needed to seize control of the game, especially when they put up a four-spot up on the scoreboard in the top of the eighth inning, thanks to a second John Hinson home run of the regional.

“(La Stella) has been on fire all weekend, and who knows what will happen if he pops another one out like he did in the second inning,” Schaus said. “I think it did change the momentum, and the crowd got a little more in to it and it got us going.” Schaus said he was happy to make that play because he was unable to record a hit, though he drew three walks.

“Guys were excited about it when we went back in the dugout,” he said. “It is like a home run or something like that. It changed the momentum. It is good to contribute like that when you are not hitting. I was happy to do it.”

So was Leggett as Clemson now sits in cruise control in the Clemson Regional. The Tigers need to win one game against the winner of the Coastal Carolina-Connecticut game on Sunday to advance to their ninth Super Regional since the format began in 1999.

“We practice that kind of thing all the time and it happened that he reacted the way he is supposed to and picked it up at the right time and threw a strike.”