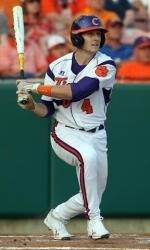 CLEMSON, SC – John Hinson had a night for the ages in Clemson’s 11-1 victory over Sacred Heart Friday night. But, we have seen this story before.

In last year’s Auburn Regional, the Tigers’ third baseman went 9-for-16 with three home runs, a double and five RBIs in being named the Most Valuable Player. After going three-for-three Friday, which included a three-run home run in the third inning to open up the Clemson Regional, Hinson is well on his way to another possible MVP performance.

“Last year was last year,” the junior said. “We are just taking it one game at a time. It was nice to have a good start, but tomorrow is the only day we have left. We have to take it like that and take it for what it is.”

What it was was another outstanding performance by Hinson, who was a triple away from hitting for the cycle. He started the game with a drawn walk, then got a double in the second inning before drilling a three-run bomb to right field in the third inning, which completed Clemson’s 11-run game.

He then finished his evening with a base hit in the fifth inning before Clemson head coach Jack Leggett pulled him. Leggett and Hinson both said they were unaware of his opportunity to hit for the cycle.

“I did not realize that,” Hinson smiled. “It’s (Leggett’s) team. Whatever he wants to do is fine with all of us. It’s not about getting the cycle, it is about winning and making it to Omaha.”

The Tigers (42-18) are off to a good start. Besides Hinson’s night, they also got three RBIs from right fielder Chris Epps and three hits and an RBI from designated hitter Phil Pohl. In all, Clemson totaled 12 hits and had seven guys drive in runs.

“It’s tournament time. That is the frame of mind you have to have,” Hinson said. “You have to take it one game and one pitch at a time. You have to live in the moment.

“The whole (regular) season is behind us now, and this is all that matters. We got what we wanted, which was to host a regional. We are now just taking it one game at a time and trying to live in the moment, while having fun doing what we do.”

Clemson hopes to keep having fun tonight when it hosts No. 3 seed Coastal Carolina at 7 p.m. in the winner’s bracket game. Coastal defeated No. 2 Connecticut 13-1 in the first game Friday at Doug Kingsmore Stadium.

“Coastal is a good team no matter if you are playing them on the weekend or midweek,” Hinson said. “Every game is like a rivalry game in the postseason. We have to take every game like it is our last and go all out every single inning.

“It is postseason, anything can happen.”

And usually that means Hinson is doing something well.