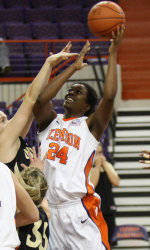 Junior Jasmine Tate had a season-high16 points and grabbed eight rebounds, and Kirstyn Wright had a game-high 18, but the Tigers hit just 19 of their 65 shot attempts (.292) in the game.

Clemson entered the game as the league’s third-best three point shooting team in percentage, but hit just 4-24 (.167) from behind the arc in the loss. Wright and Sthefany Thomas combined to go 4-20 form behind the arc, but Wright was able to hit three of her five attempts inside the arc, including a pair of impressive lay-ins.

“You take this film, you watch it, you see where you could have done better, then you try to move on from there,” said head coach Itoro Coleman, who provided popcorn and soft drinks to the first 500 students in attendance. “I’m definitely not happy with how we played, but we still have three more games left and the ACC Tournament. Anything can happen.”

Clemson forced double-figure turnovers for the 213th straight game in coaxing the Hoikies into 23, but Clemson was only able to convert for six points on those mistakes. Tech, on the other hand, was able to capitalize for 18 points on Clemson’s 20 giveaways.

Clemson held the rebounding edge, 44-39, and had 22 offensive boards, but struggled to convert on those as well, hitting for nine second chance points.

Mason’s consistent play was a major bright spot for the Tigers, and her two blocks moved her into tenth on the all-time Clemson list.

After Mason hit a jumper to pull the Tigers to within three with 7:30 to play, Nikki Davis, who finished with 17 points and nine rebounds, hit a crucial three to again widen the gap. A Kelia Shelton jumper brought the tigers back to within six, but five straight points from Shanel Harrison, who finished with 18 points, again widened the gap to 11 with 2:43 to play. Clemson tried to extend the game, but Tech hit 7-7 from the line in the final two minutes to seal the win.

It was the first annual “Pack the House” and “ACC Day” game for Clemson, and the Lady Tigers pulled no stops when promoting the game. Fans who visited ClemsonTigers.com received free admission to the game, and one student won an iPad in the second half in a drawing.

“Clemson did an outstanding job promoting the ACC women’s basketball brand,” said Brad Hecker, Director of ACC Women’s Basketball, who was on hand for the contest. “Littlejohn Coliseum is one of the finest venues in the ACC, and we were pleased to find out that Clemson drew a season-high fans for the contest. We look forward to hosting the team and its fans in the ACC Tournament in Greensboro.”