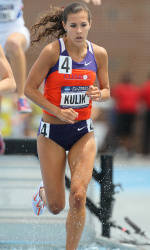 The Weaver-James-Corrigan Scholarships are awarded to selected student-athletes who intend to pursue a graduate degree following completion of their undergraduate requirements. Each recipient will receive $5,000 to their graduate education. Those honored have performed with distinction in both the classroom and on the field of competition while demonstrating exemplar conduct in the community.

Smith was one of six student-athletes from league member institutions to receive the Weaver-James-Corrigan Honorary Award. He was joined by fellow basketball player Tyler Zeller of North Carolina among others. The two basketball players will compete against each other this Saturday at Chapel Hill. Smith and Zeller were recognized for their outstanding academic and athletic performances as they pursue a professional career after college.

Zimmerman, a graduate student from Lawrenceville, GA was a three-time Academic All-ACC selection who was a finalist for the Lowe’s Senior Class Award this year. He was a semifinalist for the Ray Guy Award, the honor given to the top punter in the nation, in 2010. He is sixth in Clemson history in punting average.

Smith, a graduate from Alpharetta, GA, has been a three-year starter for the Tiger basketball team. He is on pace to be named to the Academic All-ACC team for the fourth time this year. He is Clemson’s second leading scorer and leader in assists this year.

Kulik, a senior from Simpsonville, SC, is a two-time all-region selection for the Clemson women’s cross country team. She was a first-team All-American in the 3000-meter steeplechase in 2011. She is a two-time Academic All-ACC selection and a member of the second-team Capital One Academic All-District team.

These four Clemson student-athletes will be honored along with 38 others from the ACC on April 11, 2012 at the Sheraton Greensboro Hotel at the Four Seasons in Greensboro, NC.