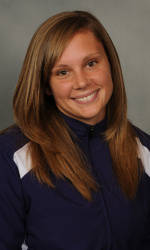 CLEMSON, SC – The Collegiate Rowing Coaches Association announced the 2010 Division I All-Region selections on Tuesday and five Tigers were named to the All-South Team. These awards recognize the outstanding performances of rowers from each of the five Division I regions and are organized into first and second team selections. Clemson’s Brittany Cummings and Michelle Nance were named to the first team and Zsofia Bende, Becca Brown and coxswain Katie Bruggeling were named to the second team.

“Brittany Cummings was named second team All-American in 2009 and she and Richard Ruggieri. “They both have been in the Varsity 8+ all year, and as seniors, have displayed a great deal of consistency and dedication for themselves, teammates and coaches. We certainly will miss them both next season.”

Clemson’s three second team honorees include graduate Zsofia Bende, sophomore Becca Brown and freshman coxswain Katie Bruggeling. This is the first individual honor for each of the rowers.

“Zsofia has made a great difference as stroke of the Varsity 8+,” said Ruggieri. “She leads well and was backed nicely by Michelle Nance and coxswain Katie Bruggeling. Zsofia is out of eligibility and she will be missed next season. Beeca Brown walked onto the team last year and really made an impact both technically and physically. She sets a nice rhythm for the middle of the Varsity 8+ and I expect her to reach great heights in the next year. Katie Bruggeling coxes our Varsity 8+ as a freshman and is always trying to find a way to get them better. We have struggled technically for a good part of the spring, however Katie’s effort allowed us to finish strong and ultimately recieve an NCAA bid.”

The ACC had 12 rowers named to All-Region teams as first-ranked Virginia had five selections, Clemson five and Duke and Boston College each had one.

All of the Tigers’ selections have spent the spring season competing in the Varsity 8+ boat. They have had a successful season as they took second at the ACC Championship and in the South Region, only behind ACC foe Virginia. Clemson also just earned their third consecutive NCAA Rowing Championship bid.

Clemson will return to action at the NCAA Championships that take place May 28-30 on Lake Natoma in Sacramento, CA.