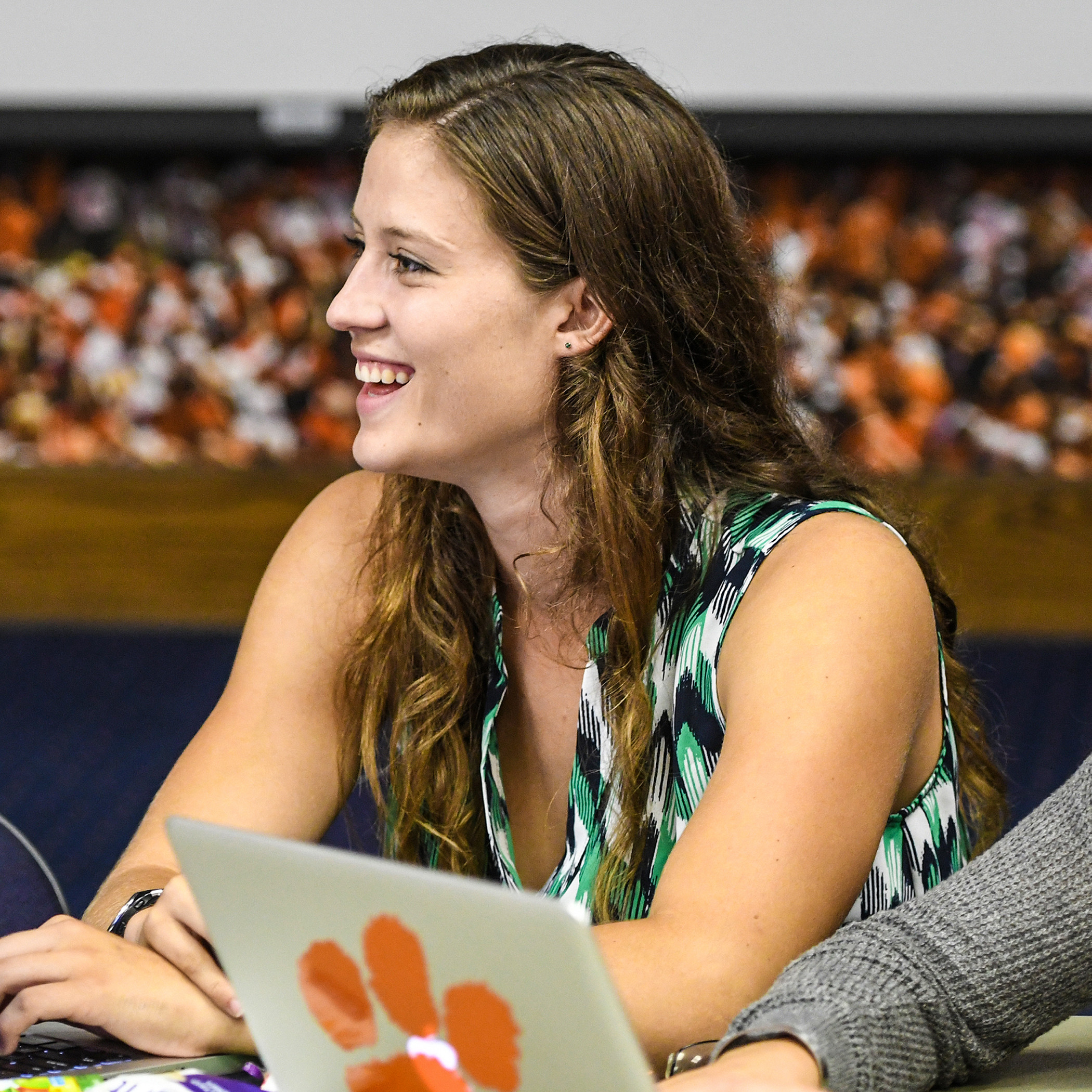 On the recruiting trail, athletes often have a choice between many schools and destinations they wish to go. Boasting many accolades, it’s often a very big moment in their lives. Junior rower Isla McRae was one of those many highly coveted athletes.

A native of Columbus, Ohio, McRae was never not playing or competing in sports, but rowing was never on her radar. In fact, it was never really on her mind given the number of sports she participated in.

“I played every sport imaginable growing up. I used to wrestle, play volleyball and ran track. I played football before I chipped my tooth and my mom pulled me out. You name a sport, I played it.”

However, things changed for her when she reached the seventh grade, as she had to switch schools. It was a decision she wasn’t too happy about, especially since she didn’t want to play sports for her new school at the time. Therefore, McRae’s mother suggested she try something new outside of the school…rowing.

“My mom was like, ‘You should try out for the rowing team.’ It was a club sport and didn’t have any affiliation with the school, so I went and did a two-week summer camp.”

McRae freely admits that rowing wasn’t something that grabbed her attention as readily as the other sports she played. In fact, she even dreaded it for a short while.

“The first week, I hated it. It was awful, Then the second week, it just stuck. I’ve been rowing ever since.

“I don’t know what it is that changed between the first and second week at that camp, but I haven’t gone back to any other sport. I used to play these sports around the same time, but they all fell off until it was just rowing.”

Eventually, McRae began to draw interest from schools across the country. Despite such offers from larger schools, she chose instead to attend Clemson. McRae stated the reason for doing so was due to the family atmosphere the team displayed before and after her visit.

“The thing that stuck out about Clemson the most was that the team itself was much more friendly and welcoming. Even after I’d left from my visit I still had people checking up on me and making sure I was ok, and I didn’t really get that from anywhere else.

Since her freshman year, McRae has steadily become a better rower and has worked to improve alongside the rest of her teammates. In addition, she has become part of the rowing team’s leadership council, which functions as team captain representatives for their respective class, with McRae representing the juniors. For a sport like rowing, team unity and communication is essential.

“Rowing is probably the only true team sport. With rowing, if you don’t all cross the finish line, you’re not going to make it there. It can be great because if you all sync up, you can feel it across the boat, moving as one. But if there’s one person off, it can throw off the entire boat. So, it can be very frustrating, especially if you know who that person is.

“It’s easy to say you had a bad day at practice and blame one person for that. At the end of it, you must help them get better and get them in sync and make sure your boat is functioning correctly. Whereas in other team sports, one player can really carry the team, but you can’t really do that in rowing.”

Coming into Clemson, McRae didn’t imagine she would assume the kind of leadership role she has on the council. While she was a team captain in high school, the responsibility on the college level is an entirely different game. However, McRae has seized advantage of her opportunity to represent her place on the council and hasn’t looked back.

At the same time, she’s also enjoying herself and likes living in the moment and the opportunity she’s been given to bond with rowers from all walks of life.

“I like to have fun and goof around during practice. I find that people are more willing to come talk to you if you’re friendly and open, so you get the feedback you need in a lot more honest way. If you’re getting the work you need done, it’s fine to be friendly and fun and try to encourage your teammates in an upbeat way. That works better for me.”

The encouragement that McRae seeks to deliver was just like the one she received from her high school coach, whom she credits for pushing her to levels she didn’t think she’d be able to reach. In fact, it was thanks to his support that McRae ended up where she is today.

“My coach in high school is still there for me. He’s taken me further with rowing than I ever would’ve gotten by myself, and he’s the reason I’m at Clemson.

“He taught me how to row and helped me through the recruiting process and through life. I was having a tough time in middle and high school adjusting. Without him, it would’ve been so much more difficult to get through. He’s helped me as a rower and person.”

In addition to her coach, McRae had some high praise for their coach, Amanda Polk, whom she truly admires for her directness and for pushing her to be the best she can be.

“Amanda Polk is so cool. She’s a fantastic human being and one of the coaches I feel the most comfortable talking to. She gives you a direct answer whether you like it or not. She’s really good at helping people row and finding the confidence and ability within themselves. She’s such a role model to look up to.”

This summer, McRae plans on trying out for the U-23 squad at the World Rowing Championships. She tried out for the junior national team in high school, and while she made the selection and high-performance camp, she wasn’t fast enough to make seat race.

This time, her goal is to go into camp and make an impression on the coaches before she’s in the water and on the boat. While she’s nervous at the opportunity, McRae is ready to prove herself.

“This upcoming summer, I want to be fast enough to feel comfortable going to this camp and giving myself the best shot at making worlds.

For someone who never thought she would be trying out for worlds or the U-23 teams, McRae would love to make worlds and has Olympic level aspirations for herself as a rower. But she’s also been exceeding academically and plans to pursue a career relating to health care or pharmacy. She plans on taking the MCAT and PCAT, and plans on applying to pharmacy school. She is considering medical school as well.

No matter what happens, McRae doesn’t regret choosing Clemson. And she’ll always be glad that she did.