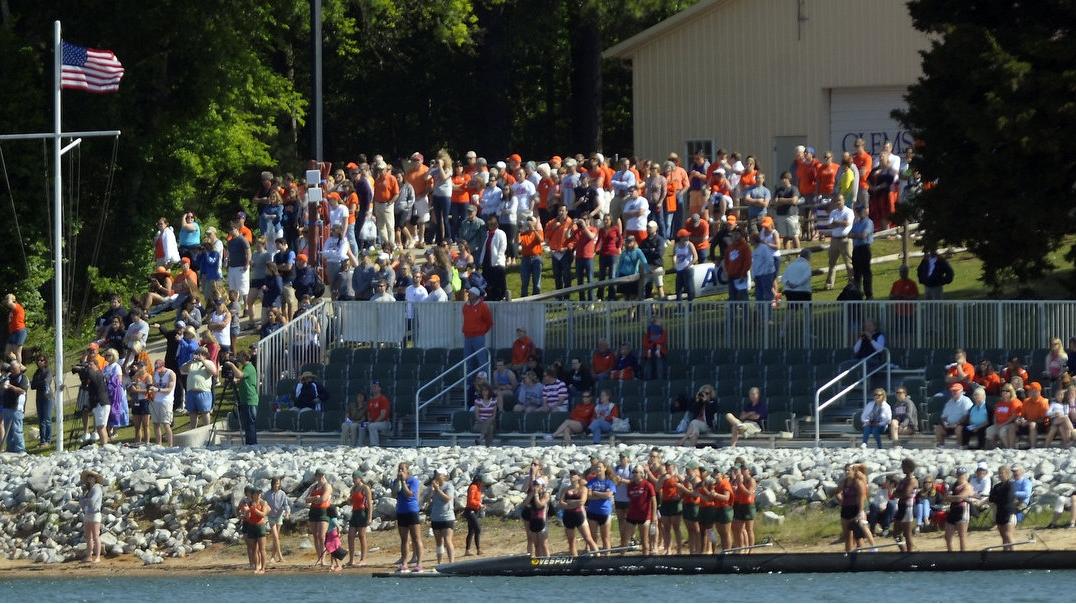 CLEMSON, S.C. – On a cool, drizzly Monday morning in March, Robbie Tenenbaum looked out on the waters of Lake Hartwell and saw 350 rowers training in harmony.

Even on a lake the size of Hartwell, so many crews sharing the waters at the same time requires no small amount of cooperation. And cooperation – on and off the water – has been the key to helping transform Clemson into the spring home of collegiate rowing.

“There was a time when there weren’t a lot of people coming here to train,” said Tenenbaum, the Clemson head rowing coach. “And I have worked and my staff has worked really closely with the Chamber of Commerce to bring more people in. And it’s a win-win. The more people that come in, the more revenue for the city of Clemson, the more exposure for the city of Clemson.”

By the end of the spring rowing season, 900 rowers from all over the Northeast and Canada will have visited Clemson to train this spring.

Those rowers represent 12 colleges, as well as two high school teams from the state of New York and the Canadian National Team, which was in town for more than two weeks.

Chamber of Commerce Tourism Director Lindsey Newton estimates each team will have about a $100,000 economic impact on the community – especially through hotels, gas and a rental fee paid to store equipment.

Last year’s total economic impact to the community was just under $900,000, and this year’s amount of visitors represents a 62 percent increase over last year.

There are few colleges anywhere with such a close relationship between a campus and the town it calls home, and the Chamber of Commerce credits Tenenbaum for helping spread the word.

In return, Tenenbaum only asks that visiting crews stay off Clemson’s home course before 8:30 a.m. each day, so his Tiger team can complete its training. “And then they have it for the rest of the day,” he said. “So, minor little concessions were able to help us really go out and help bring more people into the community, and that’s made all the difference in the world.”

Clemson has two fully buoyed racecourses at its disposal, the six-lane course that ends just beyond the rowing program’s docks, which serves as its “home course,” and a three-lane city course that begins about a mile and a half beyond the docks.

“It’s a great place for us,” Purdue head women’s coach Mike Bailey said. “Obviously, we’ve been off the water since the first week in November, and we come down here and you guys just have miles and miles and miles of flat water, and it doesn’t get much better than this.

“The one thing we’ve noticed – I’ve been coming on and off here for about eight or nine years now – every year there are more and more crews, and it’s really exciting for your crew to see all the other crews out there working hard.”

Of course, playing host to so many rowing teams is no small task for Tenenbaum and his staff. With 2,000 meters of steel cable comprising the racecourses, there is a fair amount of maintenance to keep the courses in shape, especially considering the use of Lake Hartwell isn’t limited exclusively to rowing teams.

“There are very few fair racecourses throughout the country,” Syracuse head coach Justin Moore said. “I would say Sacramento (California) probably has the best, Oak Ridge (Tennessee) is a very good course, the new Sarasota course in Florida will be interesting to see, but the Clemson course is of the highest quality. They maintain it tremendously well, and if you can race seven boats fairly, that’s a real gift.”

And while Newton and the Chamber of Commerce serve as the official hosts for the visiting teams, it also requires quite a bit of cooperation from university’s rowing program.

But for Tenenbaum, being a good host is all part of the deal if your program wants to raise its profile in the community.

“In a lot of cities, if you’re the rowing coach or a member of the rowing team, you walk around town and nobody knows who you are,” he said. “But here in Clemson, people really, truly know who the rowing team is. We do a lot of things with the community, not just our races, so it puts us in the limelight in the community in a great way.

“The other side of that is, we have a great relationship with the community helping to bring these teams into town to generate revenue for the city of Clemson. It’s millions of dollars each year that comes into the local economy because people are coming here to row.”

Not so long ago, many teams from the Northeast used to travel to Florida for their spring training destinations. But Clemson is within driving distance for the teams, which helps tremendously with the cost of transporting a large squad, and its top-notch facilities have made it the preferred spring destination for rowing instead.

But the atmosphere of cooperation on Hartwell also took on an air of competition on March 15 when the Tigers hosted Eastern Michigan, Syracuse and Boston University in a regatta, and it will again Saturday, as the Tigers play host to Buffalo, Duke, Iowa, Kansas and Purdue in a regatta beginning at 9:40 a.m.

“The fact that you have almost unlimited water, temperatures that are warm enough for rowing but not too hot, and two race courses makes it phenomenal,” Moore said. “And the people are very hospitable. Again, it’s great for us. We really enjoy it.”