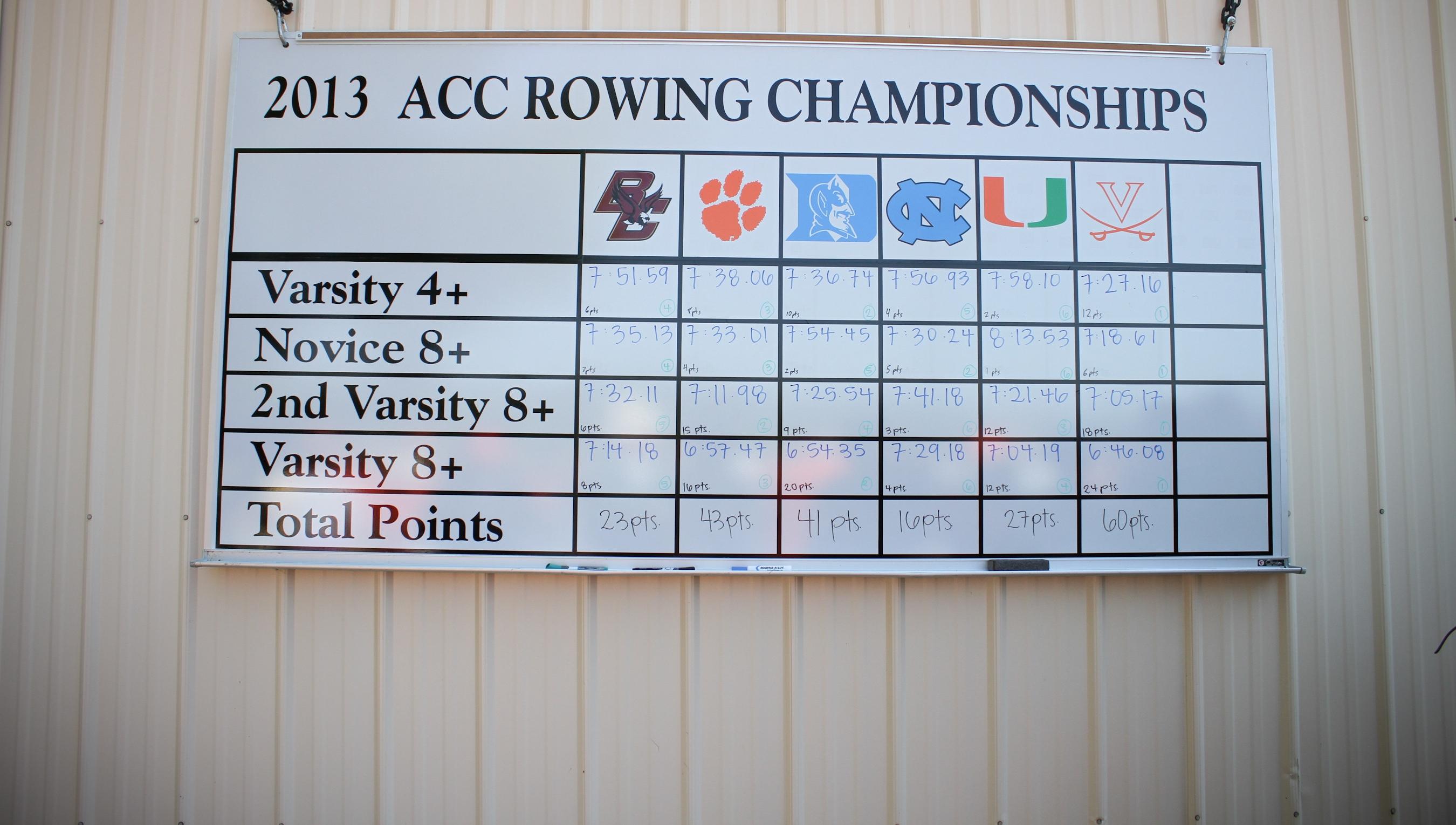 CLEMSON – There’s certainly no shame in finishing behind perennial powerhouse Virginia on the water, but that knowledge brought little consolation to the Clemson rowing team after doing so Sunday at the ACC Championships.

The 16th-ranked Tigers finished second in the regatta on their home waters of Lake Hartwell, doing no worse than third place in any of the four races to tally 43 points, not enough to dethrone the reigning conference and national champion Cavaliers, who won all four races to finish with 60 points.

“No, I don’t think there is (any shame), but the thing that makes our team great is we never look at ourselves as going out there and getting second, or getting as close as we can,” senior Kate Biladeau said. “We always expect to go out there and win, and when we don’t, there’s a disappointment factor.”

Nonetheless, the Tigers were easily the most consistent team on the day other than Virginia, finishing third in three of the four events and nabbing second place in the 2nd Varsity 8+ with a time of 7:11.98, less than seven seconds behind the Cavaliers.

“The boat that I was in, the 2V, has had a great season, and I think we gave it all that we had,” Biladeau said. “And that was evident by how we finished to Virginia.”

Clemson rowers Caroline Hackler, Milena Heuer and Giulia Longatti each earned All-ACC honors. All three are members of the 1st Varsity 8+, which pushed Virginia’s 1st Varsity 8+ – the ACC Crew of the Year – for much of their race before ultimately finishing third with a time of 7:38.06.

“Those kids were just going after Virginia,” Clemson head coach Robbie Tenenbaum said, “and they were hanging with them and they were there early in the race, and as the race progressed, just ran out of steam at the end when Duke came through them. I would much rather see a crew do that and go after the victory than not lay it all on the line.”

Many of the race times were somewhat slower than average because of a prevailing headwind that made the going tough for the rowers.

“It makes it really hard, especially for the people that sit toward the bow of the boat,” Biladeau said. “They get hit with it right away, and when you’re trying to put your blade in the water, it will flip you up. So you’re more prone to catching crabs – a crab is when your oar gets sucked under the water and it stops your boat – and I think that happened in one of our boats today.”

The Tigers have now finished second at the ACC Championships each of the last four seasons. Clemson last won the ACC crown in 2009, when it became the only school other than Virginia, before or since, to win the conference title in the 14 years that the league has competed in the sport.

Clemson also hosted the event for the fourth straight year and the 11th time overall.

“It’s great having it here,” Tenenbaum said. “I think the coaches from the conference love having it here because it is such a fair race course. The Clemson folks put on a great performance with the conference championship all the time, and we have the natural resources and the venue to be able to do this.”

The Tigers now await word on whether they will receive a bid to the NCAA Rowing Championships in Indianapolis, Ind., from May 31 to June 2. The field will be announced May 21.

“You never know what’s going to happen, but I think it’s probably going to be pretty hard for us at this point for us to get into the NCAA tournament,” Tenenbaum said.

There are nearly 90 Division I rowing programs in the nation, and Clemson has been ranked in the top 20 in all seven polls released this season, rising as high as No. 14.Because of that, Tenenbaum said it is difficult to view the campaign as anything but a success, even if his rowers weren’t completely satisfied with their finish Sunday.

“Today we got beat by some boats that raced a little bit faster than us, but our kids have been training hard and racing hard all year long,” Tenenbaum said. “And in a sport where there is no defense, sometimes somebody gets ahead of you. But I’m proud of our kids. Our seniors laid it all on the line at this championship, and for everybody else, we start working really hard to take ourselves off the (NCAA) selection bubble next year and make sure that we’re even a little bit quicker.”