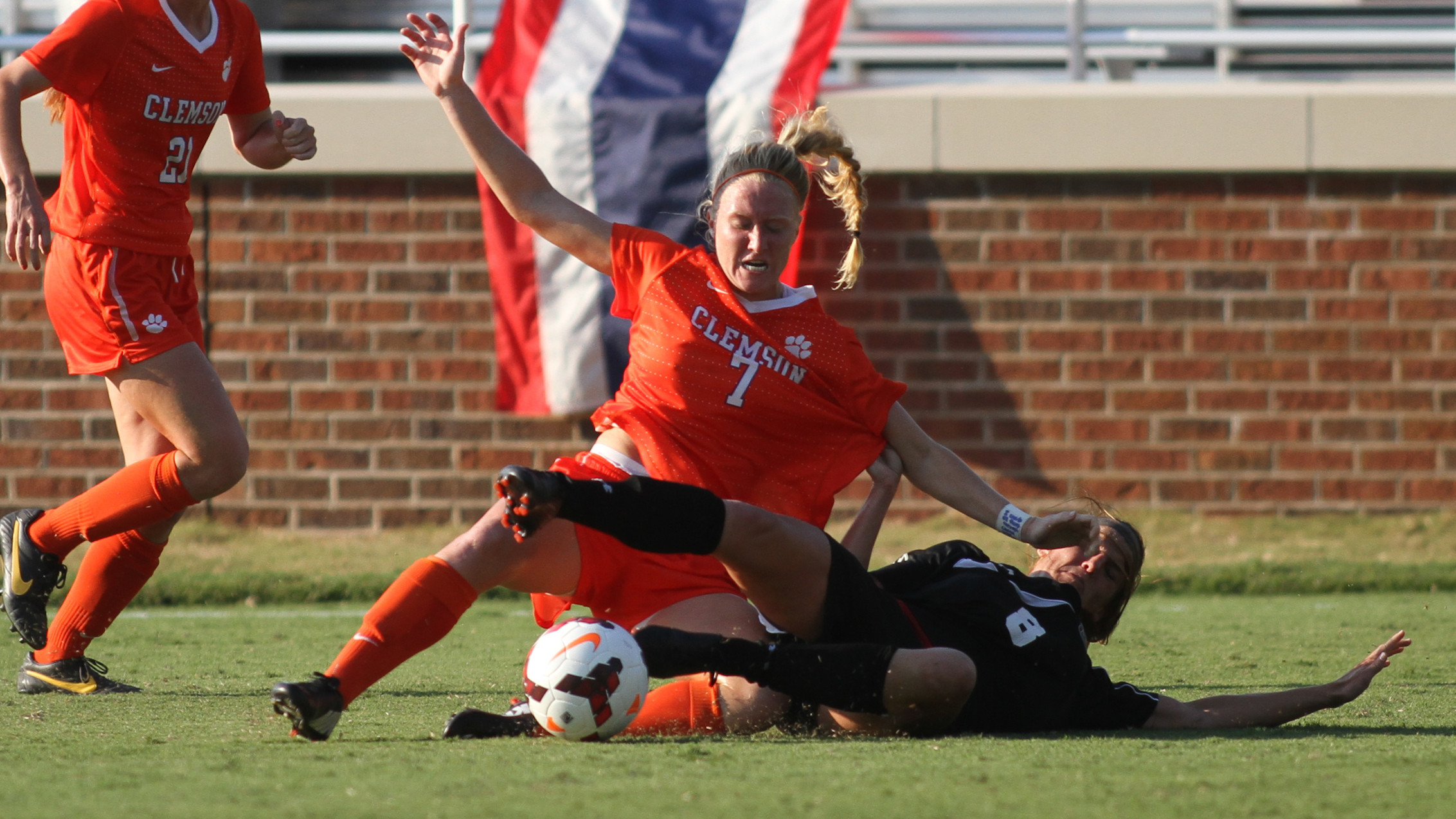 EXCLUSIVE: Padgett Excelling on Both Ends of the Pitch as a Senior

Note: The Tigers will play host to Davidson on Sunday at 1 PM at Historic Riggs Field.  The game will be broadcast live on ClemsonTigers.com via TigerCast.  Click HERE to read this week’s advance.

CLEMSON, SC – Tabitha Padgett came to college to play for Eddie Radwanski, and she was determined to finish her career that way.

But Radwanski departed to take the helm of the Clemson program in 2011, and Padgett soon followed.

“We’ve had a lot of success together, and I’m glad that she’s here,” Radwanski said. “She brings a lot of leadership. She’s very committed. She’s one of the hardest-working kids you’ll ever see.”

Padgett redshirted during the 2011 season and started all 18 games for the Tigers in 2012 – scoring two goals and assisting on three more – and entered her senior season determined to help the program in any way she could.

Even if that meant playing on both ends of the pitch.

The English major from Orange Park, FL, began Friday night’s match against South Carolina on defense, but finished the night on offense, where she scored the Tigers’ only goal and almost scored another late that would have tied the game.

“I actually quite enjoy it,” Padgett said of playing both in defense and attack. “I like a little bit of the defensive mindset and then being able to attack.  You get to read the play more when you’re in the back and then when you’re up top you know exactly what you should be doing and the runs you should make.”

That perspective paid off Friday. Padgett picked up the rebound of an Allie Kington shot and took one of her own. Abby Jones was in the way of Padgett’s original shot, but she touched the ball back to Padgett, who deftly took one dribble to the left and slotted the ball home across the face of the goal at the 80:09 mark.

“I hit a shot first, and the ball was kind of flip-flopping around in the box,” Padgett said. “Abby was on the ground and she took a little touch, and I yelled, ‘Abs, leave it!’ So she fell to the ground and took a touch, and I just finished cross-frame.”

With the Tigers still trailing 2-1, Padgett got another opportunity inside the box, having gotten behind the defense, but the Carolina keeper made a foot save to deny the chance, and Paige Reckert‘s follow-up shot sailed high with just 3:45 left to play.

“When we fell behind by two, I was really impressed with the kids’ resiliency and character to fight back,” Radwanski said. “We changed our formation and got a little more direct and got a goal to get us back in the game, and we created three other chances that could have tied it. From that perspective, I was really pleased with how our team responded.”

Padgett is one of nine starters returning for the Tigers, but many of those veterans have been shifted into different roles because of the influx of talent from the 11-player signing class Radwanski brought in this offseason.

Having started Friday’s game at left back before moving to a forward position, Padgett’s versatility allows Radwanski to have an experienced player on either end of the pitch depending where he needs her.

“I think it’s what Coach wants just because we want to get our outside backs involved in the attack,” Padgett said. “He likes putting me at left back because I do have a left and right foot, so it’s good to get in behind their (fullbacks). And then it’s good to switch it up and play me up top, as well, just because it’s something that the team is not expecting.”

While Clemson came up short on the scoreboard, it largely controlled the game in terms of possession and chances, outshooting the Gamecocks 12-9 and taking five corner kicks to two for their rivals.

Much of that pressure was due to Padgett, who moved from the back four into the attack with about 20 minutes left in the first half.

“She’s been helping us in the back, and she gives a lot of effort up front,” Radwanski said. “She’s a fifth-year senior, so she has experience, and I was happy for her to get that goal. It kind of electrified the place. Honestly, I really felt like we were going to get another one. It was a little bit of a disappointment that we didn’t get one because I kind of felt like it was coming.”