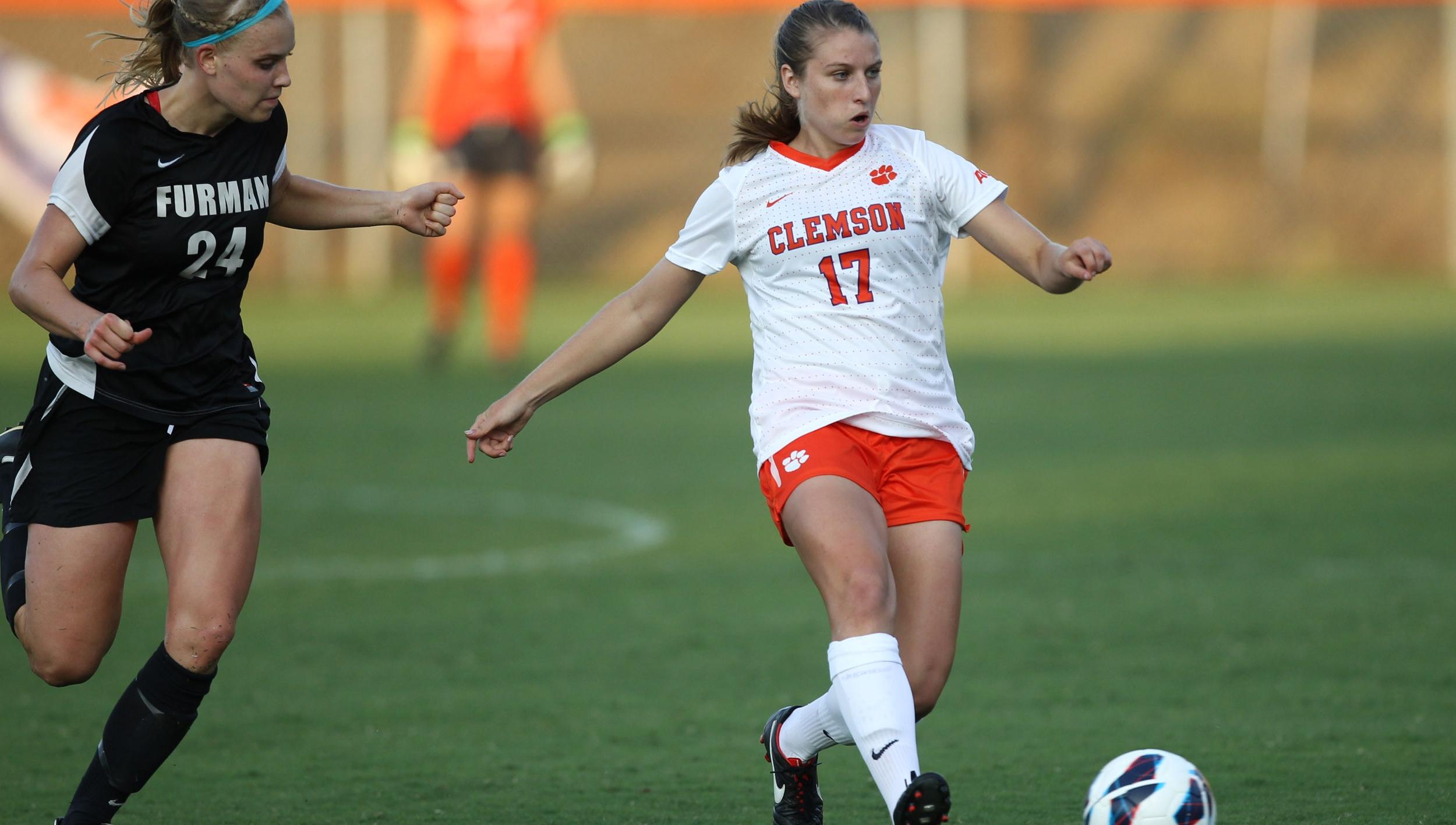 CLEMSON, SC – The Clemson women’s soccer team will play host to the University of South Carolina and Davidson College this weekend to begin a run of six consecutive home games.  The Tigers will face the 11th-ranked Gamecocks Friday at 5:30 PM and the Wildcats Sunday at 1:00 PM at Historic Riggs Field.

Both games will be broadcast live on ClemsonTigers.com, with Friday’s contest on ESPN3 and Sunday’s on TigerCast.  Fans can also follow @clemsonwsoccer for score and statistical updates throughout the games.

Clemson is 1-0-2 on the young season after tying Auburn and South Florida on the road and defeating Furman 1-0 in the team’s home opener.  Senior Vanessa Laxgang scored the lone goal on a penalty kick for the Tigers in their most recent contest, a 1-1 double-overtime draw at USF.  Freshman keeper Kailen Sheridan has been outstanding in goal for the Tigers, recording two shutouts while posting a .875 save percentage.  Offensively, Clemson is led by Laxgang and freshman Catrina Atanda who have one goal apiece and have combined for 16 shots on the season.

South Carolina, ranked 11th nationally by Soccer America, has a 3-0-1 record.  The Gamecocks are coming off a 3-0 win at Northeastern, and also have posted victories over then-#7 Duke and UNC Wilmington.  Danielle Au leads South Carolina in scoring, with three goals so far this season, while goalkeeper Sabrina D’Angelo has yet to allow a goal through four games.

Friday’s matchup against the Gamecocks will be the 19th meeting all time between the two schools, with Clemson leading the series 11-7.  The Tigers defeated South Carolina 1-0 in double-overtime in last year’s contest in Columbia, SC.

Davidson (0-1-3) will play host to Southern Methodist Friday before taking on the Tigers in Clemson Sunday.  The Wildcats are coming off of the FGCU Tournament in Fort Myers, FL where they posted consecutive 0-0 draws against Florida Gulf Coast and Florida Atlantic.  Rachel Locke has posted 20 saves and three shutouts in Davidson’s first four games.

Clemson and Davidson have met seven times on the pitch, and the Tigers hold a 6-0-1 all-time record against the Wildcats.  Most recently, the two teams played to a 1-1 double-overtime draw in Davidson, NC in 2012.