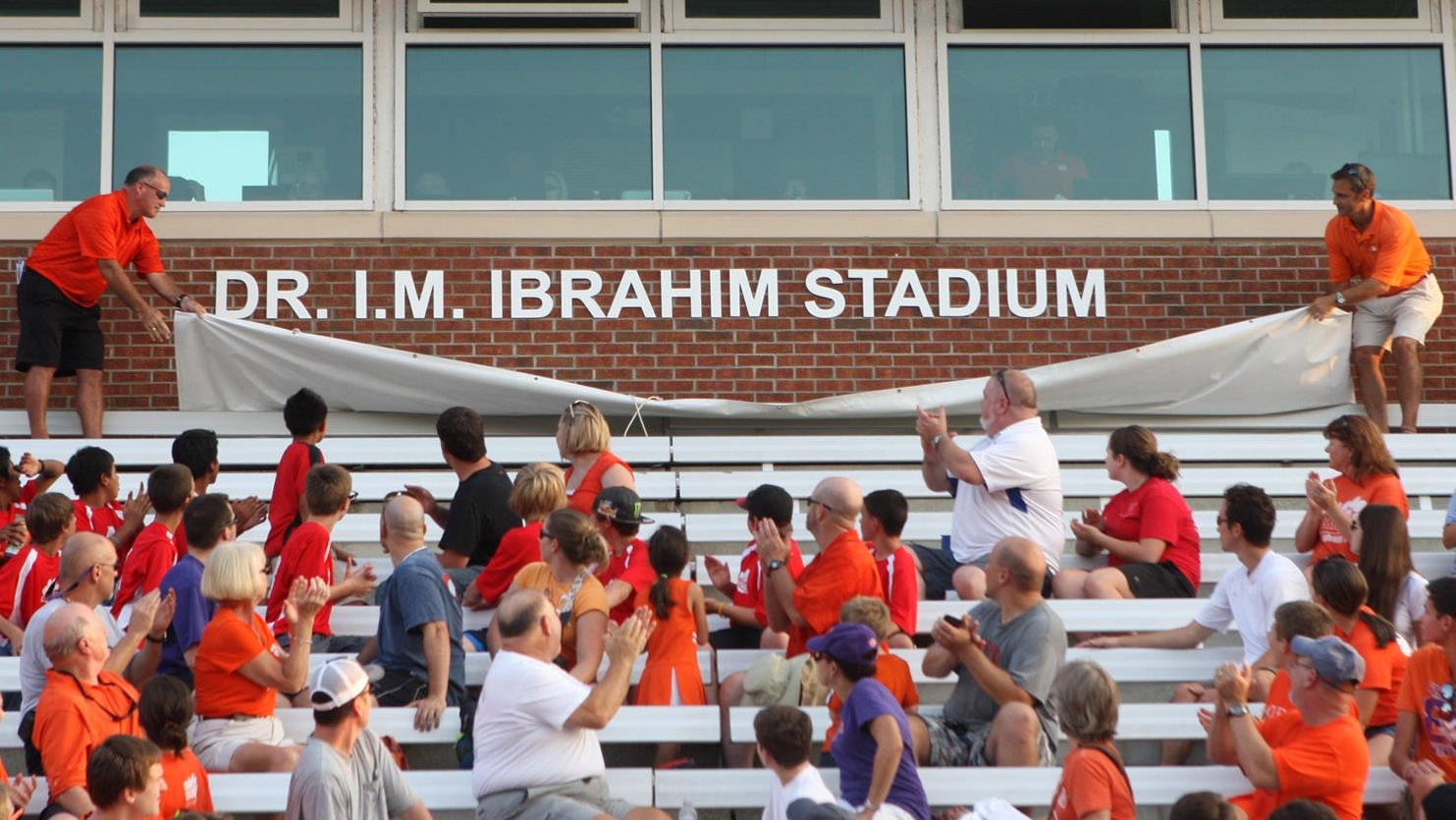 After Friday night, Noonan will have quite the visual aid.

The university dedicated I.M. Ibrahim Stadium in a ceremony to honor the legendary coach often called the “Father of Clemson Soccer,” who led the team to two national championships and 11 ACC titles, prior to the Tigers’ ACC opener against No. 14 Wake Forest at Historic Riggs Field.

“I told the guys tonight in the locker room that they were going to be part of history, that they were going to be able to look back 30, 40, 50 years from now and know that they played in the game when the stadium was named probably for the greatest coach in Clemson history,” Noonan said. “I know the football program might have questions about that, but you think about the accomplishments that the man had – and there’s no doubt that there’s a reason why that name is on the stadium.”

The naming ceremony for the late Dr. Ibrahim, who passed away in 2008, was part of the university’s annual First Friday festivities, as a parade through downtown culminated in a pep rally ahead of the Tigers’ game against the Demon Deacons.

Prior to kickoff, a banner was dropped to unveil I.M. Ibrahim Stadium on the façade of the Riggs Field press box. Fittingly, the banner was removed and Ibrahim’s name revealed by a pair of the legendary coach’s former players – one from each of his national title teams – David Torris (1984) and Pearse Tormey (’87).

“This was a great occasion,” Tormey said afterward. “It took a long time to honor the gentleman, but once it was done there, you could see the crowd, you could see the people appreciating it. And it’s a great honor for the man – very well deserved.”

Among those on the field with members of Ibrahim’s family for the ceremony was Clemson athletic director Dr. Terry Don Phillips, who agreed that the decision to name the stadium after Ibrahim had been a long time coming.

“This was a wonderful opportunity to honor his memory and his accomplishments, and what occurred here,” Phillips said. “Coach Ibrahim put Clemson soccer on the map and created a great legacy. To have the opportunity to name the stadium after him is something that we needed to do.”

The event made for an electric atmosphere and a packed house for the game itself, and the Tigers certainly fed off the crowd in battling the 14th-ranked Demon Deacons to a hard-fought 1-1 draw in double overtime.

Manolo Sanchez gave Clemson (1-2-2) the lead at the 65:58 mark on a penalty kick, sending Wake keeper Michael Lisch right and easing the ball into the left side of the net, after the Deacons were ruled to have handled the ball in the box.

Wake equalized exactly three minutes later, however, when Sean Okoli – the player guilty of the aforementioned handball – turned home a Luciano Delbono cross to pull his team even at 1-1.

After two scoreless overtimes, Mizell said the Tigers were able to glean confidence from going toe-to-toe with a top-15 team – even if they felt they should have won, particularly with their home fans cheering them on every step of the way.

“It’s always great playing in front of the Solid Orange (crowd) – the band, the cheerleaders and all the Clemson faithful,” Mizell said. “It was great. It was nice and loud at the beginning, and they stayed with us all the way through both overtimes.”

And while Clemson has just one win in five matches in the early going this season, Mizell said he and his teammates believe they are capable of much more – a belief only reinforced by the ceremony for Dr. Ibrahim, which served as a reminder of exactly what the Clemson soccer program is capable of.

“Definitely, it just makes you think that when they went on their run, they weren’t ranked, they came up from the bottom and worked their way to the top by beating all the top teams in the nation,” Mizell said. “And we have the same goals.”

And if they ever forget what those goals are, Noonan won’t have to look far for a way to remind them – he can just point toward Ibrahim’s name on the stadium wall.

“They get reminded pretty regularly,” Noonan said. “And now every time they walk out on the field, they look up and they see Dr. Ibrahim’s name on the stadium and they know what his accomplishments were.

“I think now, not just the team, but all of Clemson, knows how important and special a man he was and the job that he did while he was here.”