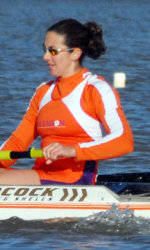 Clemson, SC – Suzanne Van Fleet, a pair of All-ACC rowers from Clemson, have earned invitations to separate national selection camps. The US Rowing organization recently announced the list of invitees for the Under 23 Selection Camp, held in Charlottesville, VA, and the Princeton 4- Camp, held in Princeton, NJ.

Cooper, a three-time All-ACC rower and 2006 CRCA All-American, has earned an invitation to the Princeton 4- Camp, which will begin June 4. She was one of just three collegiate rowers invited to the prestigious camp. Those invited to the Princeton 4- Camp will join athletes currently training at the US Rowing National Training Center to compete for spots in the women’s four that will represent the United States at the 2007 FISA World Championships. That competition is scheduled for August in Munich, Germany.

Cooper and Van Fleet helped the Tiger program to a second-place finish at the ACC Championships in April. The team returns to action for the Central/South Sprints in Oak Ridge, TN on May 12-13.