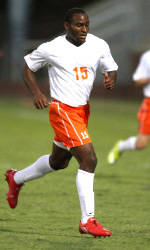 GREENSBORO, N.C. – Clemson freshman forward K.C. Onyeador was named Atlantic Coast Conference Men’s Soccer Player of the Week after helping his unranked Tigers to a 1-1 tie with 14th-ranked Boston College and a 5-0 win over Gardner-Webb.

Onyeador registered one goal and an assist against visiting Gardner-Webb on Oct. 5, scoring his first collegiate goal. The freshman went on to score in the eighth minute of play against conference foe Boston College. Teammate Nick Burton dribbled down the left side and sent a pass to Wes Nelson, who crossed the ball to Onyeador. The rookie then knocked the ball in the net near the left post for his second goal of the year.

Onyeador, a Sterling, Virginia native, is tied for third for the team lead in points (5). In addition, the newcomer has started five of the 10 games this season.

He becomes only the third Clemson player to be named ACC Player-of-the-Week as a freshman.