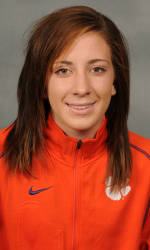 GREENSBORO, NC – Clemson’s First Varsity 8+ boat was named the Atlantic Coast Conference Rowing Crew of the Week after defeating crews from both 7th-ranked Ohio State and 12th-ranked Michigan this past weekend at the annual ACC-Big Ten Challenge in Columbus, Ohio.

Clemson, ranked 14th nationally in the latest weekly national Collegiate Coaches Rowing Association poll last Wednesday, posted a time of 6:44.40 in defeating the Wolverines (6:47.94) in the morning session, then came back to down 7th-ranked Ohio State in the afternoon, posting a time of 6:56.35 to the Buckeyes’ performance of 6:59.60.

Clemson’s crew nosed out the First Varsity Eight crew from Virginia for the honors as the Cavaliers also defeated both Ohio State and Michigan in the ACC-Big Ten Challenge. ACC teams swept all four First Varsity Eight races in the annual competition. The Tigers, led by first-year head coach Robbie Tenenbaum, will next be in action on April 16, against ninth-ranked USC, 11th-ranked UCLA, and 16th-ranked Texas in Charlottesville, V.A.

The 2011 ACC Rowing Championships will then be held on Saturday, April 23, also on Lake Hartwell in Clemson, S.C.