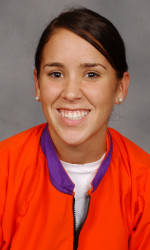 Last Friday, Clemson’s first varsity 8+ defeated Delaware after crossing the finish line in 6:17.9. The Tigers then followed up the next day with two more wins, as they defeated Iowa with a winning time of 6:23.5 and edged past a tough Navy crew with a 6:19.8 mark.

Up next for Clemson will be the 2007 ACC Rowing Championship. The Tigers will host the league championship for the third year in a row on Saturday, April 21, at Lake Hartwell, S.C.