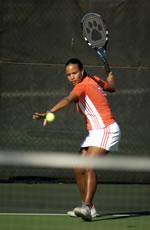 CLEMSON, SC – The 16th-ranked Clemson women’s tennis team will go on the road this weekend for its final two regular season matches. The Tigers will face 12th-ranked North Carolina on Saturday at 11:00 a.m. at the Cone-Kenfield Tennis Center in Chapel Hill. The team will travel to Durham, NC on Sunday to play fourth-ranked Duke in a 12:00 p.m. match at the Ambler Tennis Stadium.

The Tigers, ranked 16th by the ITA, are 17-3 overall and 6-0 in the Atlantic Coast Conference, most recently defeating Florida State (4-3) and Georgia Tech (4-3) last weekend. Clemson is currently tied for first place in the conference with Duke. Both teams are undefeated in the ACC (6-0) heading into this weekend’s matches.

Clemson holds a 27-12 advantage in the series against North Carolina. Last season, the Tigers upset then-12th-ranked North Carolina by a score of 4-3 at home during the regular season, but fell to the Tar Heels in the second round of the 2003 ACC Championships and the second round of the NCAA Regional Championships. So far this season, 12th-ranked North Carolina is 17-6 overall and 3-3 in the ACC, most recently defeating Virginia (4-3) and Maryland (5-2). The Tar Heels will play host to Georgia Tech on Friday before facing Clemson on Saturday.

The Tigers are 12-22 all-time against Duke with the Blue Devils winning a 4-3 decision over Clemson last season. Duke, currently ranked fourth by the ITA, is 16-1 overall and 6-0 in the ACC. The Blue Devils defeated 14th-ranked Texas on Wednesday in Durham by a score of 4-3. Duke is scheduled to play Florida on Thursday and Georgia Tech on Saturday prior to facing Clemson on Sunday.