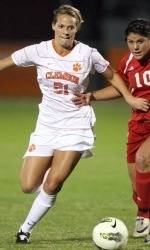 CLEMSON, SC – The Clemson women’s soccer team defeated Francis Marion on Thursday night, which was Senior Night at Historic Riggs Field. The Tigers sent seniors Ashlynne Bass, Rachel Hurd and Sarah Jacobs out with a 4-0 win in their final game in uniform for Clemson.

“Senior night is always a special night and you want to go out on a positive note,” said Head Coach Eddie Radwanski. “I appealed to the team’s emotions during halftime, and the girls really responded in the second half. They came out with great life and sent the seniors out with a win.

“I always look for effort in my players, and this senior class always displayed tremendous effort. They showed a thirst for knowledge and were very eager learners, and as a coach, you really appreciate that. As an attacking player, Rachel Hurd had some great moments this year, and Ashlynne Bass played some very good games on defense for us this season. Sarah Jacobs is one of those players that brings it every day. She is the epitome of work ethic. She may be small, but she has a bigger heart than anyone out there.”

Neither team scored in the first half, but the Tigers put three goals on the board quickly in the second half. Freshman midfielder Katelyn Reeve started off the scoring in the 53rd minute, launching a shot into the top of the net from 18 yards after receiving a pass from the left from junior forward Maddy Elder. It was Reeve’s first goal of the year.

Sophomore midfielder Vanessa Laxgang scored Clemson’s next two goals, which came just 37 seconds apart. Laxgang’s first goal was unassisted, as she dribbled past several defenders and shot the ball from the right corner of the box into the left side of the net. Laxgang’s second goal of the day, and sixth of the season, was scored on a one-touch to the near post following a cross in from the right by freshman Liska Dobberstein.

Elder netted her eighth goal of the year in the 79th minute to give the Tigers the 4-0 victory. Laxgang sent a corner kick into the box from the left side. Junior defender Heather Marik headed the corner out to Elder, who put it in the net from 12 yards.

For the game, Clemson took 27 shots and had seven corner kicks, while Francis Marion took two shots and had two corner kicks. There were six fouls called on the Tigers and seven on the Patriots. Sophomore keeper Lauren Arnold posted one save in goal for Clemson, and Lauren Vetock recorded 11 saves for Francis Marion. With the win, the Tigers conclude the 2011 season with a 6-12 record, while the Patriots fall to 4-12-1 with the loss.

“It was great to go out with a win and to be able to play with my teammates one last time,” said Jacobs after the game. “We have a great group of girls here that are willing to work hard and fight for each other, and a great staff that believes in us and we believe in them. It’s just a matter of time before this program is back to where we want to be.”