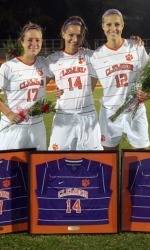 CLEMSON, SC – Clemson Head Coach Eddie Radwanski was curious as he walked into the locker room with his Tigers locked in a scoreless tie with Francis Marion Thursday night.

Radwanski, never the one to be short when it comes to motivating his players, looked at his underclassmen and said, “Do you guys like your seniors or not?”

It turns out, they do. Led by sophomore Vanessa Laxgang and junior Maddy Elder, the Tigers scored three goals in a span of four minutes and 13 seconds in the second half as they cruised to a 4-0 victory on Senior Night at Historic Riggs Field.

“We came out soft,” Elder said. “Coach asked if we liked our seniors or not. He told us to go out there and play for them in the second half and that’s pretty much what we did. He hammered it home with that speech.”

It was a fitting tribute to seniors Ashlynne Bass, Rachael Hurd and Sarah Jacobs. The three are the foundation for what Radwanski is establishing in rebuilding the women’s program and he was glad to see his underclassmen send them off with a proper farewell.

“I have always asked as a player and as a coach, whether you are good, bad or indifferent, just give good effort,” the Clemson coach said. “That’s the first clause of the contract to be an athlete. Those kids did their best to lead by example. They competed and battled and that’s all you can ask for.

“Rachel Hurd is an attacking player and she had some wonderful moments this year. It was fun to see somebody who can play a little bit near her potential. Ashlynne Bass at times showed great flashes in the back at being a solid defender and competing. She had some really good games against South Carolina and North Carolina. For me, I enjoy watching those types of performances.

“Sarah Jacobs, she brings it every day of the week. She epitomizes the work ethic you love to have in all your players. She may be small physically, but her heart is as big as anyone’s out there. Those are the kids you enjoy working with because they are always going to give you their best.”

Because they were giving their best, the rest of the Tigers, who finished the season 6-12, gave their best effort in the final 45 minutes, especially Laxgang and Elder. Laxgang totaled two goals and an assist, while Elder produced a goal and an assist.

“We came out with a little bit more fire in our belly,” Elder said. “We knew we could beat them if we just played to our level and our speed of play. We moved the ball a lot better in the second half and we put some things together offensively, which was good.”

It was also good because it marked Clemson’s first win on Senior Night since 2007 – a 1-0 victory over Duke.

“It is bittersweet,” Elder said. “We were glad we could win the last (game) for them and send them off with a good taste in their mouth. We just hate that it was their last game.”

It was also bittersweet for Jacobs and the other two seniors, who leave Historic Riggs Field as winners.

“It is great to walk off this field with a win,” Jacobs said. “Having those positive moments and energy to go out to is great. It is great to be able to end on that note.

And obviously, they love their seniors too.