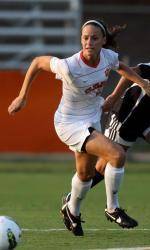 CLEMSON, SC – The Clemson women’s soccer team (1-0) opened the 2011 season with a 7-1 victory over South Carolina State (0-1) on Friday night at Historic Riggs Field. Sophomore Vanessa Laxgang scored two goals and tallied one assist to lead the Tigers in scoring on the night. Sophomore Maddy Elder also scored twice, and freshman Liska Dobberstein added a goal and two assists to the Clemson effort.

The seven goals were the most scored by a Clemson team since the 2008 season, when the Tigers defeated UNC Asheville at Historic Riggs Field by a score of 8-0.

Laxgang scored the Tigers’ first goal less than five minutes into the game. Junior Heather Marik crossed the ball to Laxgang from the right side, and she headed it into the top right corner of the net. Less than three minutes later, Elder beat a Lady Bulldog defender for her first goal of the game after receiving a nice leading pass from Dobberstein.

Freshman Stacey Huddleston got in on the scoring with her first career goal in the 17th minute of play. Huddleston picked up a loose ball on the right side and drove past the South Carolina State defender, sending the ball over the head of the goalkeeper. In the 24th minute, Elder picked up a rebound following a Laxgang shot that was deflected by the keeper, and put it in the net for her second goal of the evening.

Sophomore Hailey Karg netted Clemson’s fifth goal of the first half at the 40:07 mark. Dobberstein’s shot bounced off the keepers’ hands to the right of the goal. Karg came up with the rebound and shot it across the front of the goal into the far left side of the net.

Laxgang scored Clemson’s first goal of the second half at the 78:21 mark, and was unassisted on a 24-yard shot from the left side. Dobberstein added a goal to her two-assist performance in the 83rd minute when she beat the Lady Bulldog keeper on a fast break. South Carolina State’s lone goal came in the 84th minute, when Cassie Rodriguez scored on a free kick from 22 yards.

Sophomore Lauren Arnold earned her first win of the season in goal for the Tigers, recording four saves in the game. Danielle Murphy and Mariah Hebbe split time in goal for the Lady Bulldogs, and posted four and five saves, respectively.

“After going through the preseason and training against their own teammates, it was nice to come out tonight and see that the girls were mentally ready to play,” said Head Coach Eddie Radwanski, who earned his first career win at Clemson.

“I was pleased that we came out and put our imprint on the game early,” he added. “Scoring two goals quickly really set the tone for us. It took the edge off and I could see the increased confidence on the field. It was as if the scoring then became contagious throughout the team.”

The Tigers will return to action on Monday, August 22 as they play host to The Citadel at 6:00 PM at Historic Riggs Field. The game will be broadcast live on ClemsonTigers.com via TigerCast.