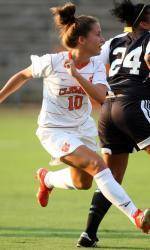 CLEMSON, SC – Vanessa Laxgang does not have to look too far to find one of her biggest fans. All the Clemson sophomore has to do is look over at the bench along the sideline and she will see new head coach Eddie Radwanski cheering her on.

And Radwanski had a lot of reasons to cheer Friday night. Laxgang scored two goals and assisted on another as the Clemson women opened the 2011 season with an impressive 7-1 victory over S.C. State.

“I’m a big fan of Vanessa’s and I think she is one of our better players,” Radwanski said. “She played like one of the better players on the field. She is dangerous, and she can get forward. She was dangerous every time she touched the ball.”

Laxgang touched the ball a lot. The midfielder finished the game with eight shots, including six shots on goal. She helped the Tigers (1-0) score the most goals in a match since an 8-0 victory over UNC Asheville in August of 2008.

“After last season, and having a rough year, it is just nice to come out and get a win tonight,” Laxgang said. “It was nice to come out early and put one away. Last year I had a lot of chances, but I was kind of nervous my freshman year. This year I’m going to do the best I can and put every chance I get away.”

Laxgang wasted little time doing that as she scored the night’s first goal at the 4:55 mark with a header into the right corner after a cross from Heather Mank.

“I think this fall should be her best year of soccer,” Radwanski said. “She was injured last year and had a little injury in the spring, but she came back. When you see her quality, you can see her special gifts. I told her, `Be the player you are capable of being.’ If she can do that, then obviously she can make a big contribution to our team.

“She is someone that we want to touch the ball. We are not asking her to do it all because you want to have a couple of other weapons, but it is certainly nice to have a player like that.”

What made it even nicer was her aggressive style of play. A miss at the 23:23 mark allowed her teammate Maddy Elder to rebound and put the ball in the back of the net, which at the time gave Clemson a 4-0 lead.

In the 78th minute Laxgang found the net for a second time, this time from 24 yards out.

Laxgang credited her night to nothing but confidence, thanks to that early goal.

“Definitely putting that first one away was good,” she said. “Last year, I missed a few in the first couple of games and that kind of set me back, I guess. So to finish the first one at the beginning of the game was a big confidence boost and it helped me throughout the game.”

The Tigers next game will be Monday against the Citadel. Kickoff is set for 6 p.m.