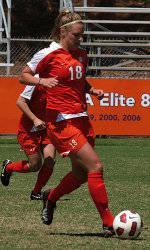 CLEMSON, SC – The Clemson women’s soccer team concluded a successful 2011 spring season on Saturday, April 16. Under the direction of new Head Coach Eddie Radwanski and his staff, the Tigers were undefeated in games against collegiate teams.

The spring slate included victories over Miami (3-0) and Virginia Tech (3-0) in the ACC Spring Showcase in Winston-Salem, NC. The Tigers also gained valuable experience in a contest against the Atlanta Beat of the Women’s Professional Soccer league.

“Overall, it was a good spring,” said Radwanski. “I was pleased with the effort and commitment, as well as the receptiveness of the group to new ideas and concepts. We made strides in areas of mentality. There was a lot of hard work and effort put into this spring season, and we got the benefit of seeing positive results, which is always a good thing – as an athlete and as a team. To go through the spring without a loss to a college team says something about our development mentally. That is something that we want to continue as we head into the fall season.

“As coaches, we were able to get to know the team even better and to get a feel for our strengths and weaknesses. We definitely saw the evolution of the team from January to April. There were moments when we played some very good soccer. Even when we played the WPS team, I was pleased with the things we did against a higher level of competition. The fact that we played well at the ACC Showcase was a good reward for the team’s effort throughout the spring.”