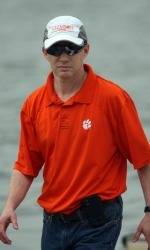 The Tigers open the spring season on March 3, hosting Eastern Michigan in the first of four straight home regattas. The Tigers host Northeastern and Temple on March 10, Iowa, Indiana, Boston University, Syracuse, Purdue and Marist on March 17, and Kansas on March 24.

The Tigers then travel to San Diego, CA to participate in the San Diego Crew Classic March 31-April 1. After two weeks off, the Tigers again hit the road and travel to Lake Monticello, VA to take on Notre Dame, Cornell and San Diego in two races on April 14, and Michigan State and Northeastern on April 15.

On April 21, the Tigers host the ACC Championships for the third straight season. Clemson is looking to reclaim the conference crown captured in 2009.

Clemson closes out the regular season in Columbus, OH where they will take on Michigan and Ohio State in two races on April 28. The Tigers will then look for a bid to the 2012 NCAA Championships May 25-27 in West Windsor, NJ.