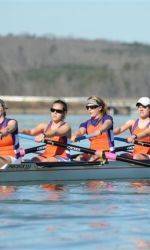 Clemson Will Play Host to the ACC Rowing Championships Saturday

It marks the eighth time the Tigers have hosted the Championship which will begin at 8:40 a.m. Saturday with an exhibition race of the Second Varsity Fours. The scoring events begin at 9 a.m. with the First Varsity Four, continuing, in order, with the Novice 8+ (9:20 a.m.), the Second Varsity 8+ (9:40 a.m.), and finally, with the First Varsity 8+ at 10 a.m.