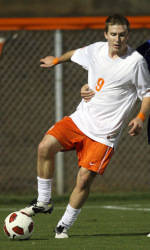 Clemson Will Play Host to Georgia Southern on Tuesday

Clemson has a 3-7-2 record overall this season. The Tigers are led in scoring by Tommy Drake with three goals and three assists for nine points. Freshman goalkeeper, Cody Mizell has a 1.11 goals allowed average along with 48 saves.

Georgia Southern is 3-8-1 on the year. The Eagles are led in scoring by Jon Cox with three goals and two assists for eight points.

This will be the eighth meeting between Clemson and Georgia Southern on the soccer field. Clemson leads the series 5-1-1. The two schools first met in 1992.