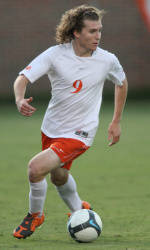 CLEMSON, SC – The Clemson men’s soccer team will play host to 11th-ranked Boston College at Historic Riggs Field on Friday night at 7:00 p.m. The game will be broadcast live on ClemsonTigers.com via TigerCast.

Clemson is 3-5-1 overall and have won two matches in a row. Clemson is led in scoring by Riley Sumpter and Tommy Drake as both players have scored six points this season. Sumpter has three goals for six points, and Drake has two goals and two assists for six points.

Boston College is ranked as high as 11th in the latest soccer polls. The Eagles are 5-2-2 overall and 1-1-1 in the ACC. Charlie Rugg has four goals and one assist for nine points to lead Boston College in scoring.

This will be the seventh meeting between Clemson and Boston College on the soccer field. The Eagles lead the overall series 3-2-1. The Tigers are 2-0 against the Eagles when playing on Historic Riggs Field.