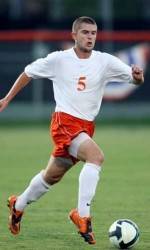 RALEIGH, NC – Austin Savage scored a goal at the 84:46 mark in leading Clemson to a 1-0 victory over eleventh-ranked N.C. State in an Atlantic Coast Conference men’s soccer match at Raleigh, NC Friday night.

In the 85th minute, Eric Cava took a shot on net and the rebound bounced back to Savaged who netted his fifth score of the season.

This marked the first Clemson win over N.C. State in Raleigh, NC since September 23, 2001 and only the second Tiger win in Raleigh since 1995.

Clemson will travel to Farmville, VA on Tuesday, November 3, to take on Longwood. Match time is set for 4:00 p.m.