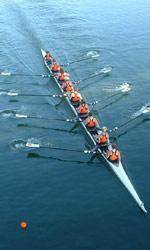 CLEMSON, SC – The Clemson rowing team will play host to the third annual ACC Championships on Saturday, April 20, on Lake Hartwell. The #24 Tigers will compete against #18 Duke, North Carolina and #11 Virginia in four races beginning at 9:00 a.m.

The Tigers finished second last year in the ACC Championships with a total of 32 points. Virginia tallied 38 points to claim the title for the second year in a row. Duke and North Carolina both finished with 15 points. Duke was awarded third place based on its better finish in the first varsity 8+. Clemson will look to defend the ACC title in the varsity 4+ competition and improve upon its 2001 results. Last year in the ACC Championships, Clemson claimed the varsity 4+ title with a time of 7:27.7.

This season, three different Clemson boats have received ACC Crew-of-the-Week honors. On Mar. 11, the novice 8+ was named Crew-of-the-Week for its victorious performance over Villanova. The Tigers’ varsity 8+ received the ACC honor on Mar. 18, after helping lead Clemson to a five-race sweep in the Clemson Invitational. Clemson’s second varsity 8+ was named Crew-of-the-Week on Mar. 25 after going undefeated at the Longhorn Invitational in Austin, TX, posting victories over Iowa, Kansas State, Southern Methodist and Texas.

The 2002 ACC Rowing Championship is open to the public and free of charge.