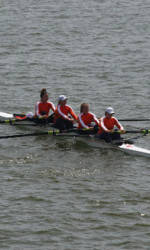 Clemson, SC – The Tiger rowing team will host the ACC Championships for the fourth consecutive spring. Boston College, Duke, Miami, North Carolina, and Virginia round out the six-team field. The events get underway Saturday, April 21 at 9:00 AM with the varsity 4+.

Virginia won the ACC crown last season and has won the championship every year it has been held. In fact, the Cavaliers have only been defeated twice in the history of the league regatta. Clemson’s varsity 4+ took first place in 2001 and the novice 8+ crew for the Tigers won in 2005.