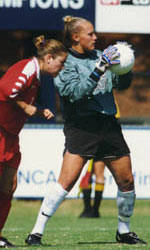 CLEMSON, SC – Florida State was credited with a goal after a Clemson defender knocked the ball into the Lady Tiger goal with 4:33 left to go in the game as 17th-ranked Florida State defeated seventh-ranked Clemson 3-2 in a women’s Atlantic Coast Conference soccer match at Clemson, SC Monday night.

Clemson opened the scoring early as Deliah Arrington scored her third goal of the year with an assist by Allison Mitchell.

Florida State evened the score, 1-1 as Amber Tollefson scored on an unassisted goal at the 29:13 mark.

Heather Beem scored her third goal of the year early in the second half (46:17) with a double assist by Deliah Arrigton and Paige Ledford.

Florida State’s Camie Bybee scored her second goal of the season and was double assisted by Marte Vik Edvardsen and Heather Dyche. The time of the goal was 58:36. The two teams appeared to be heading for overtime with 4:33 left to go in the match. However Amber Tollefson attempted a cross and a Clemson defender knocked the ball into the Clemson goal.

Clemson goalkeeper Katie Carson tied the school record for most saves in a career with 228. She had one save in tonight’s match. Clemson will play an exhibition match Thursday, September 20, at 7:30 p.m. in the Lady Tigers’ next action. The Lady Tigers will play at Tennessee Sunday afternoon, September 23, at 2:00 p.m.

“I feel as though we created chances tonight and we went forward really well,” said Clemson Head Coach Todd Bramble. “We played a lot of players and I feel it is important to develop depth. Florida State was more battled tested than we were. They have played a tough schedule having lost to Santa Clara and Portland. Again I feel as though we created chances and could not put them away. We had some defensive break downs but that is going to happen with the youth we have in the back.”