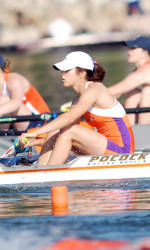 Clemson, SC – The Clemson rowing team will conclude its fall season at the 29th annual Head of the Hooch this weekend. The event will take place at Ross’s Landing Park on the Tennessee River in Chattanooga, TN. Racing will be held on Saturday, November 7 from 8:00 AM – 5:00 PM and Sunday, November 8 from 8:30 AM – 12:30 PM.

A record 8,600 rowers and coxswains will compete in the Head of the Hooch this year, making it the largest in the southeast and the second largest regatta in the country. For the first time in the 29-year history of the regatta, more women than men will be racing.