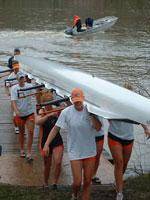 The Tiger rowing team will travel to San Diego, CA on April 5-6 to compete in the San Diego Crew Classic. Clemson will compete against the top team on the West Coast. Clemson will race along with number one University of Washington, number three Stanford, number four California and many other schools ranked among the top 25 in the nation. Traveling to San Diego for the Tigers will be the Varsity 8+, Second Varsity 8+, and for the first time the Novice 8+.

Last weekend, the Tigers competed against Iowa and Kansas State in the Kansas State Triangular on Tuttle Creek Lake in Manhattan, KS. The Tigers Novice 8+ finished its race first with a time of 7:36.6. Clemson’s Varsity 4+, Second Varsity 8+, and Varsity 8+ all finished their races second with times of 7:55.4, 7:17.8, and 7:05.3, respectively. Remaining in Clemson to compete in the Clemson sprints were the Second Novice 8+, Second Varsity 4+, and Third Varsity 8+. Both the Second Novice 8+ and Second Varsity 8+ won the finals in their events with times of 7:33.1 and 7:41.0, respectively. The Third Varsity 8+ finished their heat in the Varsity Women’s Open Four with a time of 8:15.1.

This is the last tune up for the Tigers as they prepare to compete in the ACC Championships in Charlottesville, VA on April 19.

Event Schedules and race results can be viewed at www.crewclassic.org.