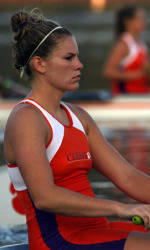 In the first race of the morning, the Tiger’s Varsity 8+ crew crossed the finish line ahead of Cornell’s Varsity 8+ in a time of 6:39.27. The Varsity 8+ boat, which consisted of Elyse Roenick (coxswain), Brittany Robinson, Ford Heiner, Megan Bendik, Catie Cornett, Liz Robb, Suzanne Van Fleet, and Jessica Leidecker, is coming off a week in which they were named the ACC’s Crew of the Week.

“We had a strong week of training,” said Clemson Head Rowing Coach Richard Ruggieri. “In many areas, we need to improve technically. We look forward to finding extra speed as we prepare for the San Diego Crew Classic.”

Clemson will return to action on April 5-6 as they hit the road for the San Diego Crew Classic held on Mission Bay in San Diego, California.