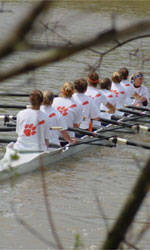 “The will to win means nothing without the will to prepare,” is a motto that is not only heard in the boathouse on Lake Hartwell, home of Clemson rowing, but the saying is embedded in the heart and soul of each member of the Clemson Tiger rowing team. The desire to win and dedication at practice paid off for the Tigers during the 2001 season. In its third year, the Clemson rowing program continued to excel not only on the water, but academically as well. On the water, the Tigers received their first national ranking. Clemson was ranked 15th on April 11, 2001, and finished the season ranked 21st. Not only did the Clemson rowing team earn it first national ranking, but received conference, regional and national accolades as well. Senior Lucy Doolittle was named the Tigers’ first rowing All-American, earning first-team honors. The Tigers’ first varsity 8+ was named ACC’s crew of the year, while the varsity 4+ claimed the ACC title.

Clemson placed four rowers, Doolitte, Aimee Fox, Gail Cadorniga and Lauren Henne, on the All-South Region team. Head coach Susie Lueck, who is entering her fourth season in Tigertown, was named the South Region and ACC Coach of the Year. She credits the success of the program to the hard work and pride each team member takes in Clemson rowing.

“The unity on the team is extremely strong and they each realize that everyone has a place on the team,” Lueck said. The team has a desire to win, along with strong ethics that they display at each practice.” The hard work ethic on the water is carried over into the classroom. Academically, the 2000-01 team posted an all-time best 3.30 GPA with 33 rowers named to the Clemson Honor Roll. “Our student athletes and coaches do a wonderful job of making academics a high priority,” said Bill D’Andrea, Director of Student-Athlete Enrichment. “The athletes compete in disciplined sports and the discipline instilled by coaches carries over to the classroom.”

This year’s senior class, who finished the spring season in 1999 as an undefeated novice team, will help Lueck guide the 2001 team through the season with the goal of being competitive nationally. With the loss of only five seniors from a 43-person roster, Lueck is excited about the possibilities. “We have a strong senior class this year with a lot of race experience. They have many leadership qualities and they have seen the program come full circle,” said Lueck.

The Clemson rowing team is primarily comprised of student-athletes who competed in other sports in high schools. With tryouts each fall, Lueck along with assistants Kelly Lynch and Laura Slice, seeks student-athletes who are committed to learning the sport of rowing and demonstrate a solid work ethic, both of which are characteristics of a Clemson Tiger rower. Lueck truly believes that with hard work and dedication every Clemson rower has the potential to be an All-American. “Lucy Doolittle, our first All-American, had no background in athletics. It is exciting to see her find success, and there is a lot of potential for other members of the team to accomplish the same thing.”

The Tigers will begin their non-traditional fall season Sept. 29 at the Carolina Classic in Durham, NC, where they will gain multiple race experience by racing in pairs, doubles, fours and eights. “You can practice for a race, but until you participate in a race you don’t gain the experiences to draw from. So we are looking to get multiple races in a day in a competitive environment,” said Lueck. Clemson will travel to Augusta, GA, on Oct. 13 for the Head of the South regatta, where the novice rowers will have their first race opportunity.

On the weekend of Oct. 20-21, the Tigers will take the varsity 8+ to the prestigious Head of Charles in Boston, MA, where Clemson will race in the women’s championship 8+. This event will allow Clemson to face collegiate and national team crews. “We will not only be racing against the top Division I schools, but we will compete against other national caliber teams,” said Lueck. “We are looking to have a good showing against top-ranked programs.”

Tiger supporters will have a chance to see this year’s team compete when Clemson returns to Lake Hartwell for parent’s weekend on Saturday, Oct. 27. The Tigers will face Tennessee in this year’s Head of Lake Hartwell Regatta.

On Sunday, Oct. 28, Clemson will participate in its annual Class Day Regatta with the senior class attempting to defend their title against the juniors and sophomores, while the freshmen will randomly draw boats and race each other. The day will conclude with an opportunity for the parents to learn the technique of rowing. “This is always exciting because most of the parents have never seen the sport of rowing. It is always a festive weekend and a lot of fun,” said Lueck.

The Tigers will travel to Gainesville, GA, on Nov. 3 for the Head of the Chattahoochee regatta. “The Hootch” features many strong Division I women’s programs including Duke, North Carolina, Miami, Tennessee and Texas. Last year’s regatta featured a new course, which will remain the same this year. “The course has a lot of turns, so there is a lot of strategy involved, but it breaks up the three miles and makes the race more exciting,” said Lueck.

Clemson will conclude its fall season with the Rivanna Romp, held Nov. 11 in Charlottesville, VA.

The Clemson rowing team will be led by seniors Lisa Mischley and Megan McGuirt, who will serve as co-captains this season. McGuirt, a member of Clemson’s Student-Athlete Advisory Board (SAAB) and a member of the NCAA women’s sports committee, not only leads on the water, but is a very dedicated student-athlete who is committed to representing student-athletes at the conference and national level. Mischley, a very charismatic athlete, will be in her second year leading the team as a co-captain. “They will be a great set of co-captains because they compliment each other well,” said Lueck. As the senior class, the inaugural freshman class of 1998-99, prepares to pass down the legacy of hard work and determination to win, they look forward to leading the team to another nationally competitive year. With the will and desire to prepare along with the depth of the team, the 2001-02 Tigers will strive to not only compete with the best, but to become the best.

Samantha Carruth is from Landrum, SC and is a graduate assistant in the Clemson Sports Information Office.