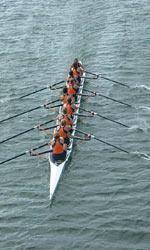 The Clemson rowing team kicked off its non-traditional fall season Saturday on Lake Hartwell as host of the Tail of the Tiger regatta. The Clemson University Rowing Association, Georgia, and South Carolina competed in the event.

“Today was a perfect season opener,” said Susie Lueck, head coach at Clemson. “The weather was spectacular and the team was fired up to race. Many loyal fans showed up to cheer the Tigers on.”

In the varsity 8+ race, Clemson’s “A” boat won easily with a time of 18:00.3, while the “B” boat claimed second place in 18:23.7. Georgia and the University Rowing Association rounded out the rest of the race.

All in all, it was a great day on the lake for the Tigers.

“The varsity women showed impressive speed in both boats by taking first and second in the event,” Lueck said. “It’s exciting for the team to show such great speed this early in the season. It was also neat to have the club team from the university race at the same time with us. It was a great example of the One Clemson…Solid Orange theme we have going on.”

The Tiger rowers return to Lake Hartwell on October 17 for the Clemson Class Day event. Each of the classes will be competing against each other.