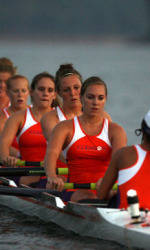 Clemson, SC – The Clemson rowing team is set to compete in the San Diego Crew Classic this weekend at the Crown Point Shores Park at Mission Bay in San Diego. The Varsity 8+, Second Varsity 8+, and the Novice 8+ will be participating in this weekend’s prestigious competition.

The 16th ranked Varsity 8+ is set to compete for the Jessop-Whitier Cup beginning at 8:50 on Saturday morning. Their heat consists of competition from USC, #17 Washington, #15 Washington State, and Purdue. Clemson previously defeated Purdue this season in the Clemson Challenge. The petite and grand finals for the Jessop-Whitier Cup will be held on Sunday morning at 8:40 and 9:00.

At 10:10, the Second Varsity 8+ will race will get underway. The Tigers are set to face USC, Washington State, Louisville, Sacramento State, Kansas State and the University of San Diego in the first heat for the Jackie Ann Stitt Hungness Cup. Should the Tigers advance, the petite and grand finals will be held at 8:00 and 10:15 on Sunday morning.

The Novice 8+ will begin racing at 11:10 on Saturday for the Laurel Korholz Cup. The Tigers will face Sacramento State, Washington, San Diego State, UCLA and St. Joseph’s in their heat.