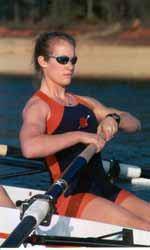 McGuirt, a senior from Shreveport, LA, is a co-captain for the 2002 season. She was just recently named Clemson 2002 Outstanding Woman in the Undergraduate Student category. During the 2000-01 season McGuirt rowed in the varsity 8+. She is a member of the 2001 Atlantic Coast Conference Crew of the Year, as well as being named to the ACC Academic Honor Roll. McGuirt is an active member of the Student-Athlete Advisory Board, the NCAA Women’s Sports Committee, the ACC Committee for Student-Athlete Welfare and the NCAA Committee for Women’s Athletics.

The 2002 All-American Strength and Conditioning athletes are recognized for their athletic accomplishments, academic and personal achievements, community involvement and leadership qualities. This year, 184 athletes from 84 colleges and universities from across the country in 19 competitive sport categories were acknowledged for their passion an hard work in and out of the weight room.

The NSCA All-American athlete of the year award program is in its 19th year and made possible by a grand from Power Systems, Inc., a Knoxville, TN, fitness product leader. A complete list of 2002 All-American athletes is available on the NSCA website at www.ncsa-lift.org.